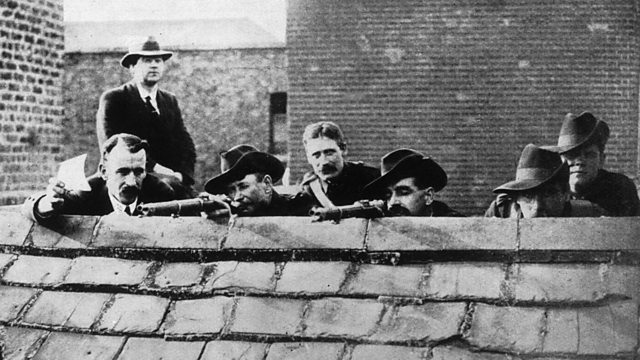 'Could You Not Just Wait?'

For six days in Easter week, Dublin was the ruined backdrop for a bloody theatre of armed Irish rebellion. Heather Jones explores the causes and events of the 1916 Easter Rising.

In 1916 a United Kingdom engulfed in global conflict came under attack from within. A group of Irish nationalist rebels allied with Germany seized control of Dublin - then part of the UK. Among their number were several Protestants, radical Socialists, a Catholic mystic, Patrick Pearse, and a hardened veteran of Fenian struggle, Tom Clarke. Men and women, teachers, actors, poets. Their main aim was an Irish Republic and they saw 'England's difficulty as Ireland's opportunity'.

The first blow of their rebellion fell on Easter Monday, outside the gates of Dublin Castle, the symbol of British rule, on a bank holiday when many in authority were at the races. The long reach of British intelligence had failed to foresee such tumultuous events in its own backyard. As the rebels tried to storm the castle gates, their first victim was an Irishman.

Their action, violent, daring, chaotic, would change the majority of Irish public opinion radically towards demanding full independence from British rule and push the North of Ireland's Unionists further towards partition. This was Britain's war within a war. The British authorities rapidly crushed the insurrection in six days, executing the leaders. But these actions rapidly transformed Irish public opinion: soon the dead leaders of the Uprising became martyrs, their Proclamation a bequest and a challenge for the new Irish state that would eventually emerge from yet more bloodshed. The wartime uprising became the foundational myth of today's Irish Republic. One hundred years on, the LSE's Heather Jones reassesses the events of the Rising in light of the opening of new archives and asks whether it was a necessary 'blood sacrifice' and why it had such a dramatic impact.

See all episodes from The Easter Rising 1916