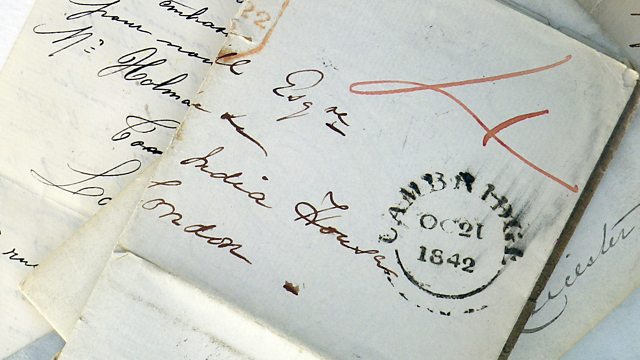 Poetry, prose and music on the theme of letters, with readings by Rosalie Craig and James D'Arcy. With texts by Austen and Hardy, plus music by Janacek, Britten and Leonard Cohen.

Yours sincerely: Rosalie Craig and James D'Arcy read extracts on the theme of letters.
Letters can be the most intimate form of expression, defiantly public, or a window onto somebody's life at a particular time. They can be funny or tragic, or in the case of some novels, a useful way for a character to convey, or miss, vital information. The programme includes a number of real letters from people such as Scott of the Antarctic, Elizabeth I and Siegfried Sassoon, plus fictional letters from works by Hardy, Austen and Shakespeare. There are letter scenes from operas by Mozart and Tchaikovsky, plus letter-related music by Janacek, Britten and Leonard Cohen.

The Singer and the Song

Letters can be the most intimate form of expression, defiantly public, or a window onto somebody’s life at a particular time. They can be funny or tragic, or in the case of some novels, a useful way for a character to convey, or miss, vital information. The programme includes a number of real letters. Some to loved ones: Captain Scott bidding farewell to his wife as he realises he’s not going to survive his expedition to the South Pole, Oscar Wilde’s letter to Bosie on the night before his trial, and Napoleon to his fickle Josephine. There is also a young Sylvia Plath writing joyfully to her mother back in America on meeting fellow poet Ted Hughes for the first time. Some of these most intimate letters have become important historical documents: Queen Elizabeth I’s rejection of a marriage proposal from King Erik of Sweden, explaining that she’s never felt that sort of love towards anybody, and a letter from the front describing the famous truce during the Christmas of 1914. A very different and public appraisal of the war was written by Siegfried Sassoon as an open letter to The Times in 1917, stating his belief that the war was being deliberately prolonged by those in power.

Letters have been used as a plot device in literature for centuries. Shakespeare’s hapless Malvolio is taken in by a letter supposedly from his revered mistress, telling him to wear yellow stockings and a huge smile, much to the amusement of the real perpetrators. And many a heroine has been undone by a letter. Tess of the D’Urbervilles realises only on her wedding morning that the letter explaining her shameful past has not reached her future husband. Similarly, Pushkin’s Tatiana writes an ill-fated letter declaring her love to Eugene Onegin; I’ve used this extract in its powerful operatic treatment by Tchaikovsky.  Literary letters are also used as an insight into the true characters of the sender, and sometimes the recipient too.  Austen’s Emma is a good example of this, as she deigns to be impressed by a letter from a suitor to her friend and protégé Harriet.

The programme also includes poems, some in epistolary form such as Edward Lear’s tongue-twisting Letter to Harry Hinde. In his poem The Letter, Thomas Aldrich muses on the strange sensation of reading the living words from someone who has recently died. Some poems say that letters are the most eloquent way to express emotions, while others deplore plain words on paper as inadequate for the magnitude of feelings they strive to convey. The final poem is by Dana Gioia, and describes beautifully the feeling that maybe a letter which never arrived could have solved everything.

There were some musical letters which I had to include: Mozart’s sublime duet as the Countess dictates to her maid Susanna in The Marriage of Figaro, and the famous Letter Scene in Tchaikovsky’s Eugene Onegin. Janacek subtitled his 2nd String Quartet ‘Intimate Letters’, and there are less well-known letter related pieces by Copland and Michael Torke. Finally, I couldn’t resist Auden and Britten’s collaboration for the GPO film unit – Night Mail.