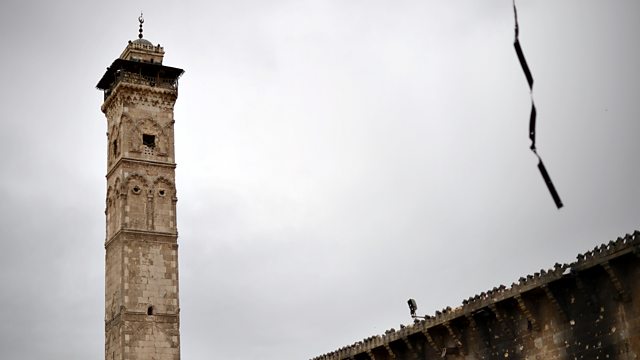 Minaret of the Umayyad Mosque, Aleppo

The unique and famous minaret of Aleppo's Great Mosque, which is now only a waterfall of rubble.

Since 2012, Aleppo - Syria's largest city - has been a key battleground in the conflict, and hundreds of its residents killed or displaced. Aleppo, thought to be the oldest city in the world, is now left in ruins. One of the great monuments of the city was the minaret of the Umayyad Mosque (also known as the Great Mosque) which was toppled in April 2013. It's still unclear who was responsible - Syrian government forces and rebels blame each other. We tell the story of the minaret, a world heritage site that was connected to that other great Aleppo landmark, the souk.

With thanks to Haider Adnan of BBC Arabic, Elyse Semerdjian of Whitman College, and Aya Mhanna.

The Lion of al-Lat

See all recipes from Minaret of the Umayyad Mosque, Aleppo