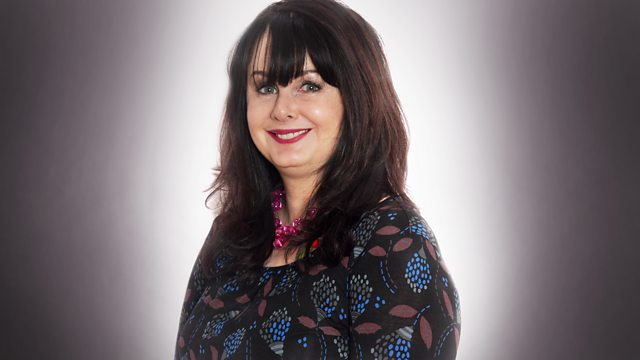 Marian Keyes joins the Rev. Richard Coles and Aasmah Mir. A columnist, blogger and bestselling author of a dozen novels, she has sold more than 33 million copies worldwide. She shares her passion for "the twitters", collecting drawer knobs, browsing in chemists and "beachouse banjo" - chalk painting old furniture.
Gilding the recycled lily, mosaic maker Ed Chapman talks about his portraits which have turned sugar cubes into Alan Sugar, Welsh slate into Richard Burton and gravy stains into Andy Murray. Such inventive thrift will appeal to Jordon Cox, king of the couponeers, and the lad who flew to Sheffield via Berlin to save £8 on the train fare. His passion for couponing began after watching at TV programme. It was watching an inflight movie that inspired Adam Walker to give up his day job as a kettle and toaster salesman, to become the only Briton to have swum the Oceans Seven Challenge. He recalls inventing a new stroke after he torn his bicep, that led to a new career in coaching and teaching technique.
JP meets Saturday Live listener, Margaret Amey, to explore her collection of 700 teapots.
And the singer Tony Christie's shares his Inheritance Tracks: Come Back To Me, performed by Sammy Davis Jnr, featuring Buddy Rich Live at The Sands; and The Folks Who Live on the Hill, sung by Peggy Lee.

Making It Up As I Go Along, by Marian Keyes.
The David Beckham mosaic is on show at Phillips Auctioneers in Mayfair.
Man -V- Ocean by Adam Walker is out now.
Tony Christie's 'The Great Irish Songbook' is out now on Wrasse Records,