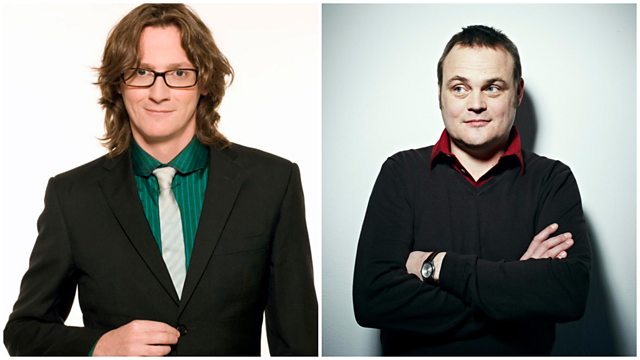 Irish stand-up comedian Ed Byrne chats to the Pub Landlord himself Al Murray in the talk tag show. From February 2016.

Two heavyweights of stand-up are in conversation as Ed Byrne interviews Al Murray.

Ed tackles Al on a vast array of topics from Thackeray's attitude to the Irish to the thorny issue of offence in comedy via how best to talk to McFly.

Ed Byrne is an Irish stand-up comedian and actor who has been a favourite on the international comedy scene for 20 years. His celebrated observational routines made him a leading light of the UK stand-up circuit in the mid nineties and he went on to tour internationally, playing festivals and theatres across the world. In 1998 he was nominated for the prestigious Perrier Award at the Edinburgh Festival alongside eventual winner Tommy Tiernan, Peter Kay and Al Murray.

After an early foray into stand-up as a character called 'The Murderer', Al Murray created his famous Pub Landlord character in the mid nineties as part of a touring show with Harry Hill. The Pub Landlord went on to tour venues and festivals worldwide before making his own chat show and sitcom for Sky. Outside of the Pub Landlord, Al is well known as a presenter of history documentaries and stood against Nigel Farage in South Thanet during the 2015 UK General Election.