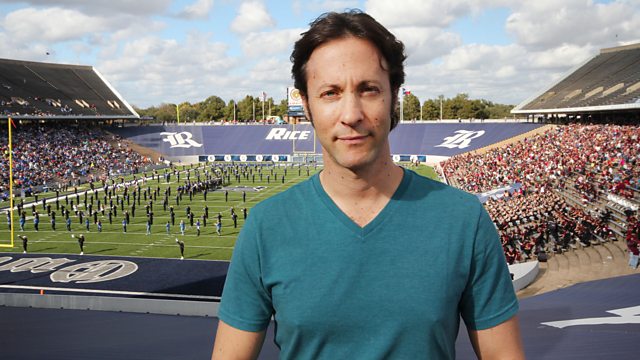 Why Do I Need You?

The Brain with David Eagleman
Episode 5 of 6

Series exploring how the brain conjures up the world we take for granted. This episode looks at how the human brain relies on other brains to thrive and survive.

Series in which Dr David Eagleman takes viewers on an extraordinary journey that explores how the brain, locked in silence and darkness without direct access to the world, conjures up the rich and beautiful world we all take for granted.

This episode explores how the human brain relies on other brains to thrive and survive. Dr Eagleman demonstrates how, from as young as ten months old, babies can discern who is trustworthy and who isn't.

Our fundamentally social brain draws us together into groups. An experiment with a simple game of catch reveals that the pain we feel when we are excluded from the group is the same kind of pain as when we hurt ourselves. The powerful testimony of Sarah Shourd, who was imprisoned in Iran for over a year and was kept in solitary confinement - and others like her - demonstrates the absolute need the human brain has for others. She describes the slow disappearance of her 'self'.

In groups, humans have accomplished great things - but there's a darker side. For every 'in group' there is always an 'out group'. Dr Eagleman reveals the results of an experiment he carried out in his lab showing that people who witness a hand getting stabbed with a needle feel less empathy at a deep neural level if that hand is labelled with a religion to which they do not belong.

He journeys to modern-day Bosnia to hear from an eyewitness about what happened in 1995 when genocide returned to Europe. What could have allowed for such horrific group-on-group violence? Dr Eagleman believes that neuroscience offers important answers. Dr Lasana Harris at Leiden University has discovered that there are certain circumstances under which the human brain stops perceiving others as human and it becomes easier to suspend the moral and social rules we normally live by.

Finally, Dr Eaglemen explores what can be done to prevent these neural effects, and reveals that our fundamentally social nature holds the key.

How Do I Decide?

Who Will We Be?

See all episodes from The Brain with David Eagleman