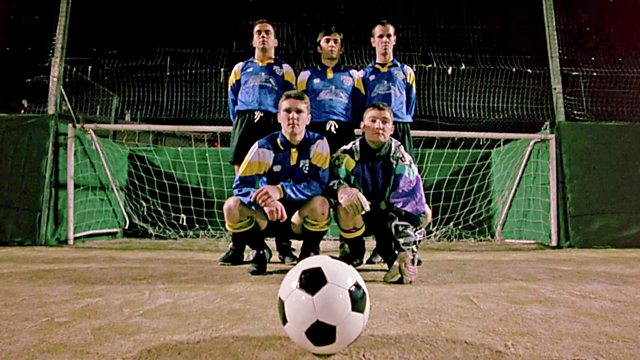 In February 1996, Trainspotting exploded onto the big screen. Twenty years on, the real-life recovering addicts who inspired the filmmakers and actors reveal their own stories.

In February 1996, Trainspotting exploded onto the big screen. Twenty years on, the real-life recovering addicts who inspired the filmmakers and actors reveal their own stories.

"All the characters are so recognisable that you don't know whether to laugh or cry. You are asked to do both." Review of Trainspotting, The Guardian, February 1996.

Scotland has a massive drug problem. The number of substance-related deaths has more than doubled since 1996 - the year Irvine Welsh's novel about a group of heroin addicts became one of the UK's most successful films, directed by Danny Boyle and starring Ewan McGregor and Robert Carlyle.

Trainspotting won a string of awards for its uncompromising portrayal of drug abuse. Much of the action and emotion on screen was informed by a small group of real-life recovering addicts, who advised the filmmakers and actors.

Calton Athletic Recovery Group is credited at the end of the film for special technical advice, and thanked "for their inspiration and courage".

Now, members of the Glasgow-based charity reveal their own stories.

Davie, Willie, Peter, Colin and others from Calton Athletic Recovery Group talk candidly and intimately about their own experiences of drug addiction and recovery. They discuss the impact on loved ones, the need for honesty, and their own decisions to "Choose Life", in the famous opening words of the film.

They also talk about their involvement in the making of Trainspotting, including their cameo roles, and they consider how true to life it was - and still is.