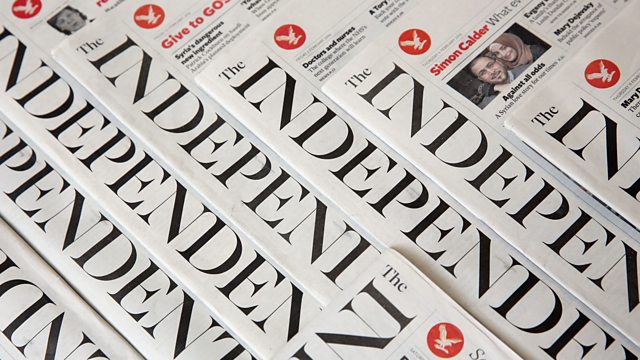 A look at the media world, including whether only being available online will secure the Independent's future and a comparison of channel-led v genre-led divisions at the BBC.

After thirty years, the Independent and the Independent on Sunday are to end their print editions next month - although they'll continue online. In addition, sister paper i has been sold to Johnston Press for £24 million. The Independent was selling more than 400,000 copies a day at its peak in the late 1980s, but its current paid circulation is around 56,000. Steve Hewlett talks to two key decision makers involved in the change; Amol Rajan, Editor of The Independent and Steve Auckland, Group CEO of ESI Media, which owns all three titles.

BBC 3 has this week become an online-only platform. It follows reports that BBC 3 might merge with Radio 1 to form a new 'BBC Youth' brand, and that the BBC Director General Tony Hall may soon announce plans for a corporation-wide restructuring into genre-led divisions, such as BBC Inform & BBC Entertain, rather than channels. Steve is joined by Lorraine Heggessey, former Controller of BBC 1 and Tim Suter, media consultant & founding partner in Ofcom, to discuss the pros and cons of reshaping BBC content in this way.

New Ipso rules, Assisted suicide being 'normalised' in the media