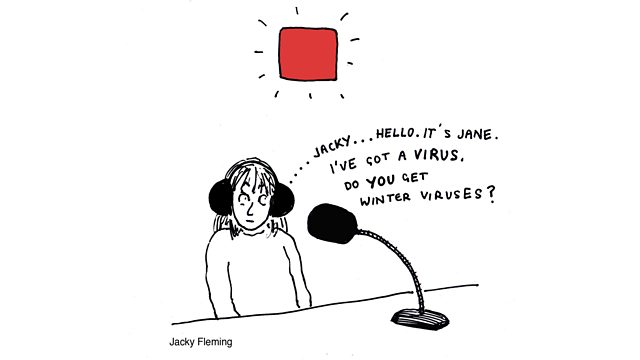 Iconic cartoonist Jacky Fleming on female genius and Sue Klebold, the mother of one of the Columbine High School killers, on living with the pain caused by her son.

Iconic cartoonist Jacky Fleming talks about female genius and her first book in 10 years The Trouble with Women.

Sue Klebold, the mother of one of the Columbine killers talks to Jane about living with the pain caused by her son. In 1999, two teenagers armed with bombs and guns walked into their school and began shooting. Twelve children and one teacher died at Colorado's Columbine High while another 24 were injured in what was then 'the worst school shooting in history'. Sue Klebold's son Dylan carried out the carefully planned attack along with Eric Harris before they shot themselves. Speaking in a rare interview, she describes her love for her son and attempts to find a reason for the tragedy.

The number of childminders in England has dropped by 10,000 in the past five years, putting pressure on childcare places and raising costs for working parents. Why are so many deciding to leave the work?

Flouting the dress code: being yourself or just plain rude? Hilary Alexander and Lucy Mangan discuss.