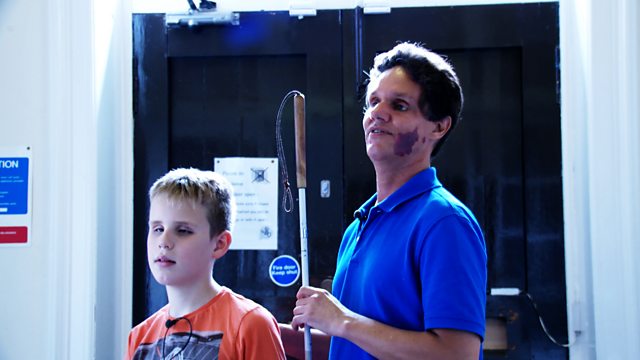 Documentary following Ethan, a 10-year-old blind musician, as he learns echolocation from Daniel Kish in time for him to become the first blind pupil at St Mary's Music School.

Ethan was born blind. He's now a 10 year-old boy who collects sounds on his 51 dictaphones, composes music, and performs on stage in concerts. Until now he's been home-schooled, but last year he was offered a place at St Mary's Music School in Scotland - one of the best in the country. The problem is he struggles to get around.

This is where Batman comes in. His real name is Daniel Kish and like Ethan he's blind. He's a master of echolocation. He makes clicking noises - like a bat - to build a picture of the world around him. Neuroscientists have done experiments on him and found that he's managed to activate the visual part of his brain. He's taught people all over the world to "see through sound" and he's so good at it that he goes hiking, cycling and rock-climbing.

"Batman" (Daniel) comes to Scotland to spend 10 days with Ethan, to teach him echolocation and help him prepare for his new school. The documentary follows Ethan's progress as he learns from Daniel Kish. Listeners are introduced to the principles of echolocation, they follow Ethan practicing at home, on the train and at his new school. They're brought into Ethan's world, through music composed specially by Ethan, and they're with him on his birthday, on long walks in the Scottish hills, right through to his experience at school.

We follow Ethan up to his final day of term to find out how he's done, and see how he copes with his biggest challenge yet: playing an accordion solo with the orchestra at the school concert.

Produced and presented by Helena Merriman.

See all clips from Batman and Ethan (2)