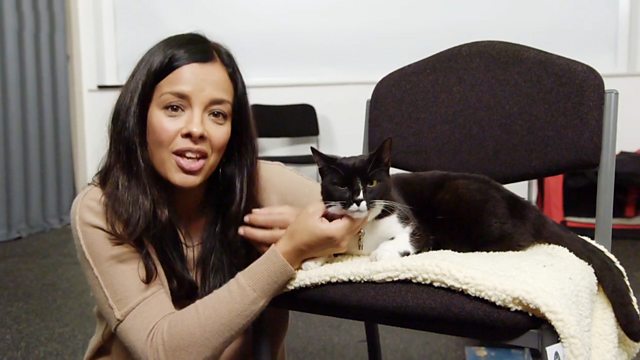 Chris Packham and Liz Bonnin battle it out to find out whether cats or dogs are the better animal. Round one tests whether either species can understand numbers.

Based at one of Britain's largest cat and dog veterinary centres, Chris and Liz go head to head to test different aspects of each animal. A specially commissioned nationwide pet census also reveals exactly how the public feel about our canine chums and feline friends. Round one begins with intelligence as Chris and Liz find out whether either species can understand numbers. In Vienna, Chris is astonished to discover that dogs can discriminate between higher and lower numbers of dots and in a UK first, Liz tries out the test on cats with surprising results.

Round two tests their sensory powers to work out which animal has the better vision, sense of smell and hearing. Our cats and dogs have to negotiate a maze in the dark, but which one will find their way through in the fastest time? Chris challenges top sniffer dog Boris to find him in a distracting busy city and discover which species has the widest range of hearing. The final round looks at whether cats or dogs are the most physically agile by testing which can jump the highest, which is the fastest sprinter and which the best endurance runner. With so many groundbreaking tests, who will be in the lead at the end of episode one?

On their search for answers, Chris comes face to face with a pack of wolves, whilst Liz confronts an Arabian wild cat to discover how the relationships between cats and dogs and humans have evolved. Together, they put our favourite pets under the microscope to see what really makes them tick and crucially, how they compare with each other.

See all episodes from Cats v Dogs: Which is Best?