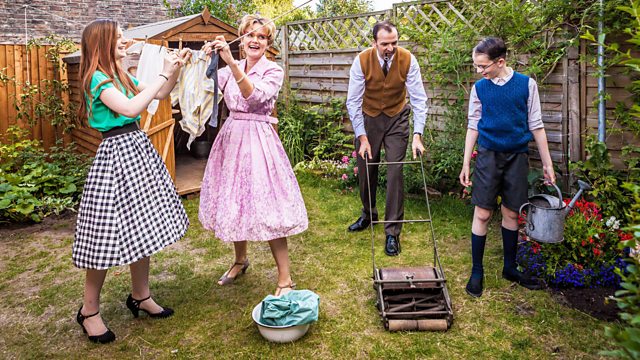 Back in Time for the Weekend
Episode 1 of 6

A family gives up their 21st-century technology and travels back in time. As they enter the 50s, it's goodbye to the flat-screen TV and hello to a piano and some darning.

Like many modern families, the Ashby-Hawkins home is stuffed full of tablets, computers, phones and gadgets to distract them in their spare time. But for one summer, they agreed to give up all their 21st-century technology and travel back in time to discover the radical transformation of our leisure time since 1950.

The family's own home becomes their time machine as they are transported back to a different decade each week. Guided by presenters Giles Coren and social historian Polly Russell, the family's entire experience is underpinned by the Family Expenditure Survey, a government study which ran from the 50s right through to 1999. The survey's detailed spending records give us the best possible clue as to what families were doing with their leisure time across the five decades.

As they enter the 50s, it's goodbye to their flat-screen TV and hello to a piano, some darning and a pipe to keep them amused. It's the era of formality and austerity, as many families bought little more than fags and a spool of thread from week to week.

Dad Rob finds out that he's expected to be handy with a tool kit, while mum Steph, who normally works full-time, discovers that it's not her tablet or phone that she misses, but the family's white goods. Without them, she's stuck at home for hours with all the washing, cooking and cleaning expected of a 1950s housewife.

But there are upsides - 16-year-old Daisy gets a chance to learn ballroom dancing courtesy of Angela Rippon, who was a teenager in the 50s, while 12-year-old Seth discovers the joy of the great outdoors, spam fritters included...

See all episodes from Back in Time for the Weekend 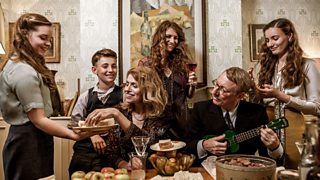 Families travel back in time to experience how food, leisure and society has transformed.