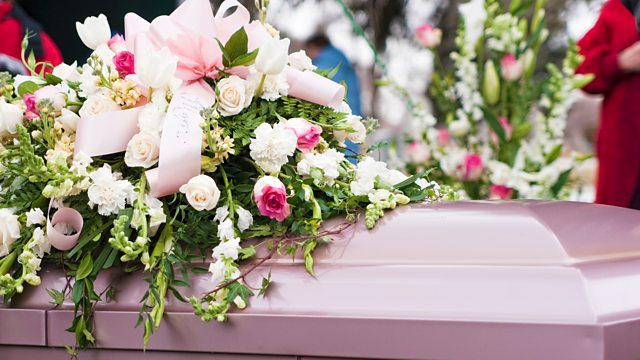 How to have a good death?

Why do so many people struggle to talk about death? And if they do find it difficult, why do they need to learn to talk about it? How to have a good death.

Nearly five years ago Dr Kate Granger was diagnosed with terminal cancer. Kate talks to Jenni about her decision to talk publicly about her illness, her wobbly days and being a normal Yorkshire girl.

Research for the Dying Matters Coalition said 32% of British adults think about dying and death at least once a week, but 72% of the public believe that people in Britain are uncomfortable discussing dying, death and bereavement. Do we struggle to talk about these things and if so why? And if we do why do we need to learn to? Rabbi Julia Neuberger & Jenny Kitzinger, Professor of Communications Research discuss.

What image springs to mind when picturing funeral directors - men in black? Not for much longer. Largely excluded from funeral services for a couple of centuries, women are reclaiming their role in the ceremonies we perform for the dead. Gemma O'Driscoll set up her own funeral directors three years ago in South Wales. Its name? Gemma O'Driscoll & daughters. Jo Morris went to meet the seven of them.

Columnist & broadcaster, Emma Freud lost four members of her family quite close together and had to arrange their funerals. She talks about what she learned in that emotional rollercoaster ride. Barbara Chalmers set up finalfling.com in an effort to help people in Emma's situation but also to encourage people to think through and record their own funeral wishes. They join Jenni to share what they think people need to know & remember to plan for.

How to make an Advance Decision or an Advance Statement: https://mydecisions.org.uk/

How to make, register or end a lasting power of attorney