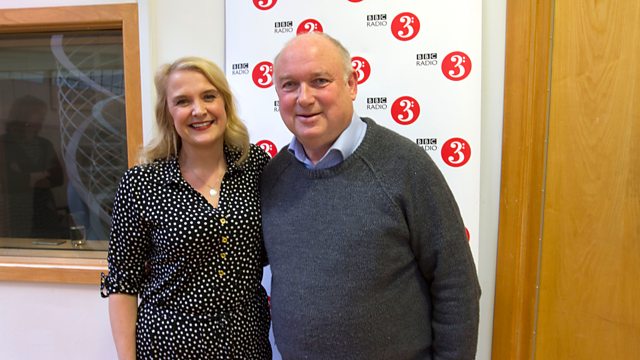 9am
My favourite... American songs. Ranging from expressions of personal faith and childlike innocence to celebrations of American landscapes and jazz, Sarah chooses a handful of her favourite songs written by American composers including Aaron Copland, Leonard Bernstein, Samuel Barber and George Gershwin.

9.30am
Take part in today's musical challenge: trace the classical theme behind a well known song.

10am
Sarah's guest this week is the author Louis de Bernières. Well known for his worldwide bestselling tale of love and war Captain Corelli's Mandolin, Louis's other works include the acclaimed Birds Without Wings and A Partisan's Daughter, as well as collections of poetry and short stories. His latest major novel, The Dust That Falls From Dreams, the first instalment of a family saga that opens with the end of the Victorian era, was released last year. Louis is also a keen musician and plays the flute, the guitar and, of course, the mandolin. Louis will be talking about his life and his writing, and sharing a selection of his favourite classical music with Sarah, every day at 10am.

10:30am
Sarah places Music in Time. The focus is on the Modern period and the influence of cabaret clubs on the music of Erik Satie, particularly his song Je te veux.

11am
Sarah's Artists of the Week are the Brodsky Quartet, named after the dedicatee of Tchaikovsky's Violin Concerto, Adolf Brodsky. The Brodskys are known for their insatiable desire to explore and expand the string quartet repertoire. Throughout the week Sarah showcases the quartet's passion for 'all good music' as she features their interpretations of classic quartets by Dvorak, Verdi, Debussy and Britten, as well as rare masterpieces by Respighi, Panufnik and Delius.

Answer: Eric Carmen's 'All By Myself' is based on the 2nd movement of Rachmaninov's Piano Concerto No.2