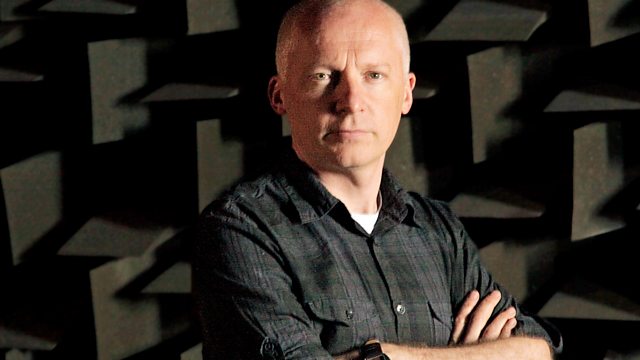 The Essay The Secret Mathematician
Episode 1 of 5

Mathematician Marcus du Sautoy uncovers the mathematics hidden behind his favourite buildings, including in the geometric forms of the radically shaped architecture of Zaha Hadid.

Mathematician Marcus du Sautoy untangles the fascinating maths hidden beneath the surface of some of our great contemporary and historical works of art. His essays cover architecture, visual arts, music, literature and the artistry of maths itself.

Marcus du Sautoy's first secret mathematician is the architect Zaha Hadid. Although Hadid doesn't talk explicitly about maths as an inspiration behind her work, Marcus du Sautoy finds it hidden in the geometric forms that characterise her radically shaped buildings. Floating in the swimming pool at the Aquatics Centre that Hadid designed for the 2012 London Olympics, Marcus turns his mathematical perspective upon the wonderful wave-like roof. If you draw a triangle on the surface of this roof, he says, the angles will not add up to 180 degrees as they do when a triangle is drawn on a flat surface. Marcus explains the fascinating geometry underpinning Hadid's work.

Hadid is not the only architect to catch the eye of the mathematician: Le Corbusier in the twentieth century and Palladio in the sixteenth century were both architects who consciously based their designs on mathematical principles, such as the Golden ratio and the Fibonacci sequence. It's perhaps no surprise that architects depend on maths to make sure their buildings stand up, but Marcus will show that maths determines the aesthetic as well as structural qualities of many brilliant buildings from the Ronchamp Chapel to the new maths galleries at the Science Museum in London.