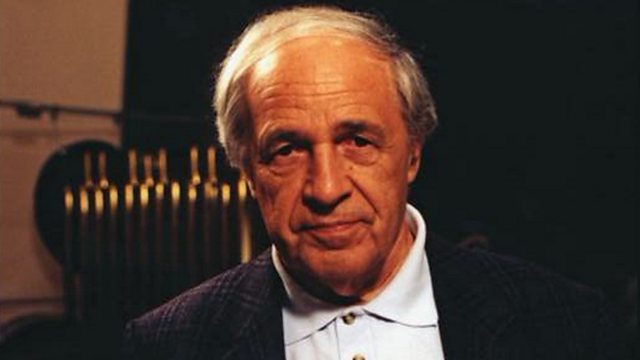 Tom Service presents a tribute to the French composer and conductor Pierre Boulez who died on 5 January at the age of 90.

Tom Service presents a tribute to the French composer and conductor Pierre Boulez, who died on 5 January at the age of 90.

It’s a moment when that phrase ‘the end of an era’ is actually true. Boulez transformed the way that orchestras and ensembles all over the world programme and perform contemporary music. As arguably the most powerful cultural politician in musical history in the 20th and 21st centuries, as mentor, as youthful firebrand and later as an establishment figure, Boulez influenced the fabric of our musical lives. Whether you agreed or disagreed with him, Boulez the icon is impossible to ignore.

Born in 1925, Pierre Boulez studied at the Paris Conservatoire under Olivier Messiaen. The “angry young man” and enfant terrible is as renowned for his words as much as his music: he once declared the best thing to do with opera houses was to blow them up, and that any musician who “has not experienced... the necessity of 12-tone system is USELESS.” But his music is celebrated and influential, and his influence as a conductor is even broader, taking in the BBC Proms with the BBC Symphony Orchestra, and “rug concerts” with the New York Philharmonic, as well as the founding of Ensemble Intercontemporain in 1976, and IRCAM in 1977.

With BBC archive of Boulez himself talking, from a lifetime thinking and speaking about music, and specially recorded interviews with contributors, including pianist and long-term collaborator Pierre-Laurent Aimard, composer Oliver Knussen, Michael Haefliger (Executive and Artistic Director of the Lucerne Festival), and Hervé Boutry, General Manager of Ensemble InterContemporain. Plus extracts from Boulez's last major BBC interview which he recorded with Tom for Music Matters in 2011.

Boulez 1925-1916 – A collection
Radio 3 in Concert: A tribute to Pierre Boulez
Boulez at 90 – Music Matters
Boulez interview with Tom Service
Boulez at the BBC
Hervé Boutry on Pierre Boulez