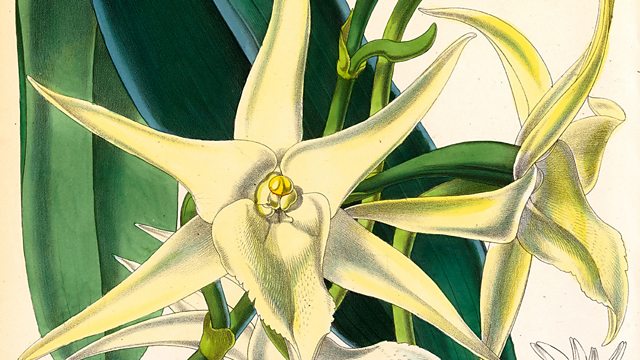 Orchids are now the world's most collectable plants. How has their biology manipulated us into spreading them? Jim Endersby presents a new scientific and historical exploration.

Anyone with a few pounds to spare can buy a tropical orchid these days. Growers have perfected the process of germinating the thousands of tiny seeds produced by each seed pod, enabling them to grow the plants in their millions. We are now able to pop into our local garden centre or supermarket and pick up a piece of tropical paradise whenever we want.

How has their appearance, scent and biology manipulated us into spreading them? The historian Jim Endersby examines how a potent mixture of imperial conquest, mysterious glamour and scientific study has helped one of the world's most beguiling plants to fascinate everyone from houseplant owners to generations of scientists.

Orchids have been associated with sex since ancient time (their name comes from the Greek orkhis, meaning testicle), but it was during the 19th century that the mysterious glamour of orchids really began to take hold. They turned on their keepers and started trying to kill those who grew them. The first victim was a Mr Winter-Wedderburn, who almost died when a vampiric orchid tried to drain every drop of blood from his body. Luckily attacks only occurred in fiction. But why did deadly sexy mobile killer orchids start to stalk the suburban greenhouses and the imaginations of their cultivators , in turn spawning what's now a multi-billion worldwide orchid industry?

Historian of science, Jim Endersby of the University of Sussex, shows us that the killer orchids are rooted in the sober, scientific work of Charles Darwin who devoted many years to working out why they have such fantastic shapes. He realised that orchids are fertilised by insects and their shapes, colours and scents all serve to lure their hapless pollinators to them often with extraordinary tricks of mimicry. They proved a tool for Darwin to demonstrate natural selection in action and he'd go on to change the ways people imagined plants, transforming them from dull, unresponsive vegetables into active creatures, who might prove to be crafty, lethal, sexy or even moral.

Today, botanists estimate there to be some 30,000 orchid species. with blooms ranging from the showy Cattleya to the spider-shaped Brassia. They know that the highly specific relationships that orchids have with just one insect pollinator have played a major role in the success of the family. But paradoxically their success is also their weakness. Adaptations to very particular local conditions can make species vulnerable to sudden changes in their environment.

As Jim Endersby reveals, this process has been tracked in detail on the Sussex downs, through a 3 decades-long study of one species of native British orchid, the Early-Spider orchid. These tiny plants have chocolate-brown flowers, covered in what look like hairs, that look a little like bees. The orchids use them to trick insects into what scientists call "pseudocopulation"; the bees try to mate with the flowers, and end up transferring their pollen to another plant. But warmer British spring temperatures are threatening the delicate relationship between the orchid and its pollinator. Could the key to saving these orchids lie with us? They've seduced us with their shapes, colonised our imaginations and modified our tastes so that we are now the next victim lured into assisting them with their efforts to reproduce.

Main Picture : Probably the first specimen of Angraecum sesquipedale to bloom in Britain, drawn by Walter Hood Fitch. From William Jackson Hooker, A century of orchidaceous plants selected from Curtis's botanical magazine (1849). Reproduced by kind permission of the Board of Trustees of the Royal Botanic Gardens, Kew.

See all clips from Crafty Orchids (4)