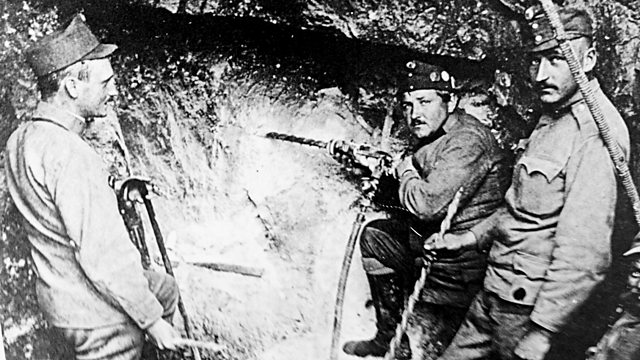 Christopher Clark travels to Slovenia, the setting of the Italian front and the scene of the some of the harshest fighting to take place during the First World War.

Professor Sir Christopher Clark travels to the Julian Alps in Slovenia on the 1914 border between Austria-Hungary and Italy. This was the scene of some of the harshest fighting to take place during the war. He examines why Italy entered the war on the side of Britain, France and Russia and traces Mussolini's post-war rise to power back to Italy's involvement in the First World War.

Chris explores how the mountainous landscape shaped the nature of fighting on this front, where troops fought at altitudes of up to 12,000 feet in temperatures as low as -30ºC. Even today, warmer summers are releasing corpses and other material from their icy tombs. The river Soca, or Isonzo as it is known in Italian, has a similar burden of associations that the Somme does to the British because the Italians lost half of their entire war casualty here.

With Mark Thompson and Željko Cimpric.