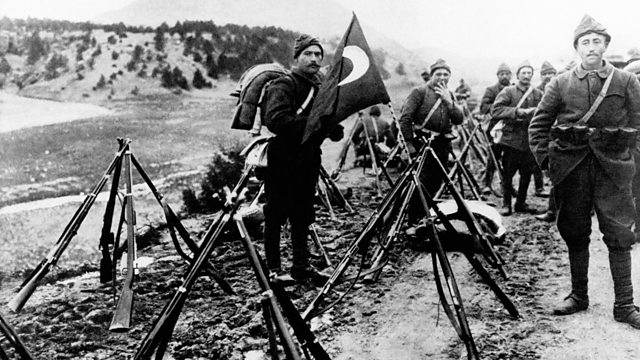 Christopher Clark explores how the Ottoman Empire's entry into the First World War brought the Middle East into the conflict with consequences that are still felt today.

In November 1914 the Ottoman Empire formally declared 'holy war' against Britain, France and Russia. In the second programme of his new series, Professor Sir Christopher Clark explores how the entry of the Ottoman Empire into the First World War brought the Middle East into the conflict, with consequences that are still felt today.

Chris travels to Gallipoli to visit the battlefields where thousands of allied troops, including Australian and New Zealanders, encountered a forceful foe in the Ottoman Turkish army, under the command of Mustafa Kamal, later known as Atatürk. As an Australian, Chris remarks on how the memory of the doomed Gallipoli campaign became a unifying legend for the young Australian nation. He is accompanied in Gallipoli by Professor Mustafa Aksakal, who explains how Gallipoli was also birthplace of the new Turkish republic and has a special significance in modern day Turkey.

The War of Empires