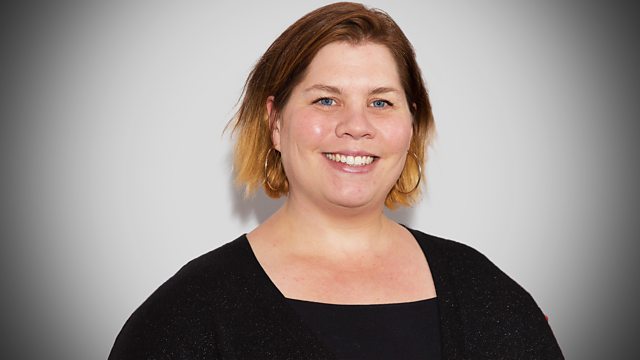 Comedian Katy Brand graced our screen in her Big Ass Show where we saw her parody pop culture. She danced like Beyonce for Sport Relief, has written her first novel Brenda Monk is Funny and her acting credits include Peep show and Nanny McPhee. Now she's a judge on the Costa book awards.

Almost four years ago Clare Owen found a gold wedding ring with an inscription and date. Her desire to reunite the ring with it's owner led her to set up her own lost and found company, Lostbox. She joins us to talk about how she's since reunited animals, soft toys and even people and to sing the praises of much maligned social media.

Levison Wood is an explorer who can currently be seen Walking the Himalayas in a Channel 4 documentary series. It's a distance of 1700 miles. He previously Walked the Nile. He joins Aasmah and Richard to share his experiences and explain why he is drawn to such expeditions.

Dr Eugenia Cheng is on a mission to make maths accessible. She does online maths tutorials, teaches maths to arts students and advises primary school teachers and she's even written a book about it in relation to baking: How to Bake Pi. She'll be talking about her passion for maths, music and infinity.

JP takes a look in the diary of listener Barbara Bindley and we have your thankyous.

Levison Wood's book Walking the Himalayas is out now, and the fourth and fifth parts of the series air on Channel 4, 8pm Sundays and the whole series can be viewed on All 4.

Guests and presenters in the studio