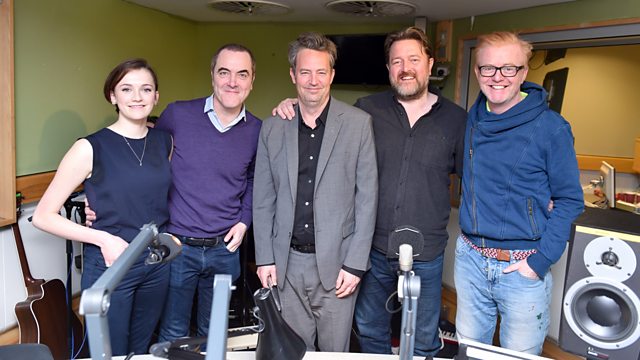 Chris, I don’t know if it’s just me, but I always find January hard going. New Year’s resolutions abound and I envy those who are able race back into the gym, jump headlong into a 7-day detox juice cleanse and schedule some time to reboot.

On the other hand, I’m still trying to clear the backlog e-mails that should have been answered in December. Perhaps I need to search out some supernatural intervention like the “Lucky Man” in James’s new show.

As my son and I stepped out to do the groceries the other night, the chilly evening gust reminded me of another January night 25 years ago.

I was 15 years old and it was an astonishingly cold Canadian evening just after New Year’s. Having grown up in Canada, Matthew would know exactly the kind of night I mean.  My family were huddled around the fireplace when the doorbell rang.

The man standing at the door was probably my height, but much older. Gray hair peaked out from underneath a threadbare, snow-covered cap. His coat was at least a few seasons past it’s best before date and he wore running shoes when the icy footpath called for boots.

He was selling coupons for a local garage. An oil, transmission and engine check for $20. Judging by the wad of coupon books in his shivering hands, it didn’t look like he’d sold very many.

My first instinct was to buy one. I even had a $20 bill in my pocket. I should have at least invited him in for a cup of tea. Instead, perhaps annoyed at having my warmth disturbed, I said a firm “no thank you” and closed the door. As I turned around, I felt immediate regret.

I quickly opened the door to call to him but he was gone. I even pulled on my jacket and ran out into the night. It was as if he’d vanished.

There’s no dramatic ending to this story, but it’s stayed with me all this time, because 25 years later I still wish I’d acted differently.

“This being human”, counselled the mystic Rumi, “is a guest house. A joy, a depression, some momentary awareness comes as an unexpected visitor. Welcome and entertain them all! Be grateful for whoever comes, because each has been sent as a guide from beyond.”

The possibilities for blessing are all around us. My resolution is to pay closer attention to when they pop up and try to capture them, whether it’s with smile, a hand up or a warm cup of tea. Juice cleanses, thankfully, are not required.