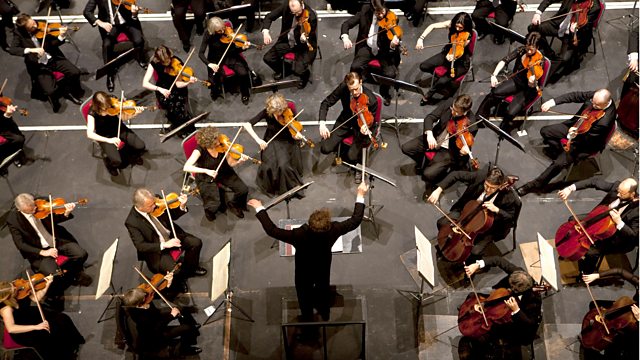 Thomas Sondergard conducts the BBC National Orchestra of Wales in two pieces by Dutilleux and Mozart's Requiem. Akiko Suwanai is the soloist in a completion of a Debussy nocturne.

On the centenary of the composer's birth, Principal Conductor Thomas Sondergard joins the BBC National Orchestra of Wales in two contrasting pieces by Dutilleux. Metaboles, a tightly organised exploration of musical metamorphosis, and his lyrical poem for violin and orchestra. Akiko Suwanai is also the soloist in a new completion of Debussy's sketches for a Nocturne for violin and orchestra. Finally another another musical completion - Mozart's Requiem.

Henri Dutilleux (1916-2013) struck a bold path in the music of twentieth century France. When those around him were ripping up the rule book to make a break with the past, he found a way to develop music, in particular form, colour and harmony, whilst remaining connected to the sound world of Debussy and Ravel. Thomas Sondergard and the BBC National Orchestra of Wales commemorate his centenary with Metaboles, an explosive exploration of musical structure, and Sur le même accord, a lyrical nocturne for violin and orchestra. Dutilleux's love of Debussy is reflected in a new completion by Robert Orledge of the sketches for a Nocturne written for the great violin virtuoso Ysaye. Another musical completion closes the programme, Mozart's much-loved Requiem, left unfinished when the composer died in 1791.