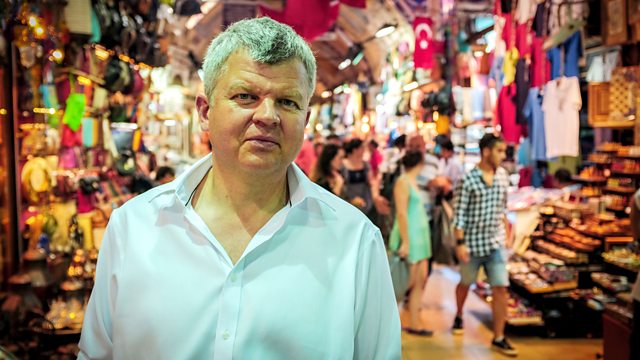 My Mediterranean with Adrian Chiles
Episode 1 of 2

Adrian Chiles tours the religious festivals of the Mediterranean to find out whether his choice of church was an accident of birth and geography. Adrian visits the Dalmatian coast.

Adrian Chiles converted to Catholicism ten years ago, but wonders whether his choice of church was an accident of birth and geography. If he had been born in Istanbul or Jerusalem, would he have been equally happy being a Muslim or a Jew? In this first episode, he visits the stunning Dalmatian coast, where he meets up with his Croatian mum and reveals how he got the nickname Holy Joe.

Next stop is Istanbul, where he has fun in the Grand Bazaar before heading out on the Bosphorus with a Muslim fisherman. During Eid al-Adha, a major Islamic festival, Adrian struggles to watch the celebratory sacrifice. He travels to Jerusalem for the Jewish festival of Sukkot, and then moves on to Tel-Aviv to get drunk with a gay, atheist, Jewish celebrity chef. His final stop is an Evangelical concert by the Dead Sea, attended by Christians from all over the world.

See all episodes from My Mediterranean with Adrian Chiles