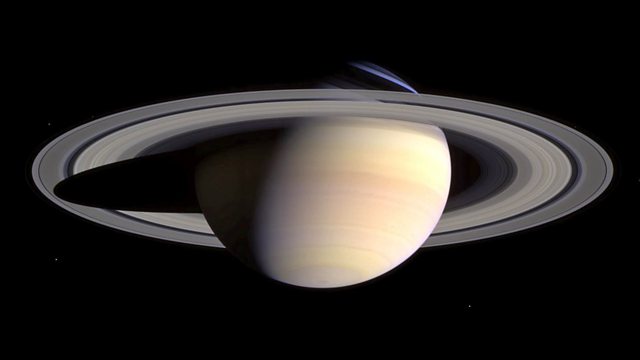 Melvyn Bragg and guests discuss Saturn, the most distant planet easily visible to the human eye, with over 60 moons and, with its rings, one of the most striking sights in space.

Melvyn Bragg and guests discuss the planet Saturn with its rings of ice and rock and over 60 moons. In 1610, Galileo used an early telescope to observe Saturn, one of the brightest points in the night sky, but could not make sense of what he saw: perhaps two large moons on either side. When he looked a few years later, those supposed moons had disappeared. It was another forty years before Dutch scientist Christiaan Huygens solved the mystery, realizing the moons were really a system of rings. Successive astronomers added more detail, with the greatest leaps forward in the last forty years. The Pioneer 11 spacecraft and two Voyager missions have flown by, sending back the first close-up images, and Cassini is still there, in orbit, confirming Saturn, with its rings and many moons, as one of the most intriguing and beautiful planets in our Solar System.

Andrew Coates
Deputy Director in charge of the Solar System at the Mullard Space Science Laboratory at UCL.

McGraw-Hill Yearbook of Science & Technology (McGraw-Hill, 2010), especially chapter on Enceladus by A. Coates

Michael Meltzer, The Cassini-Huygens Visit to Saturn: An Historic Mission to the Ringed Planet (Springer, 2015)