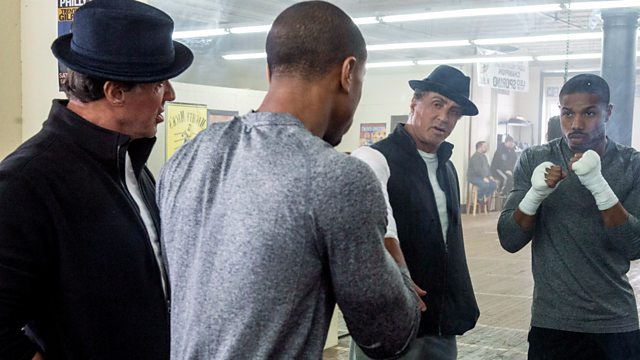 Samira Ahmed talks to Creed director Ryan Coogler about working with Sylvester Stallone, hears how 20 artists are lighting up London and asks what England's anthem should be.

Creed is the latest film in the Rocky franchise starring Michael B. Jordan, with Sylvester Stallone reprising the role of Rocky Balboa. Writer and director Ryan Coogler describes how his father's illness inspired him to make the movie, and how he persuaded Stallone to let him write it.

In Lumiere London over 20 international artists will transform buildings and streets in the capital into a major outdoor showcase of artworks made from light. Helen Marriage, director of Artichoke, the company that has created the festival, and artists including Julian Opie, discuss the challenges of such an ambitious project.

Cuts to public funding mean that more museums are being forced to close their doors or introduce entry charges, according to new research from the Museums Association. Director Sharon Heal and academic and author Tiffany Jenkins discuss the role of museums in our heritage and culture, what we're in danger of losing, and whether museums could do more to find other funding.

What should England's anthem be? A vote today in The House of Commons has brought a public consultation on the matter one step closer. Jerusalem is the favourite, but what other songs might capture the spirit of England?

See all clips from Creed, Lumiere London, Museum cuts, An anthem for England? (3)

Creed is in cinemas from Friday 15 January, certificate 12A.

Lumiere London is running from 14 – 17 January.