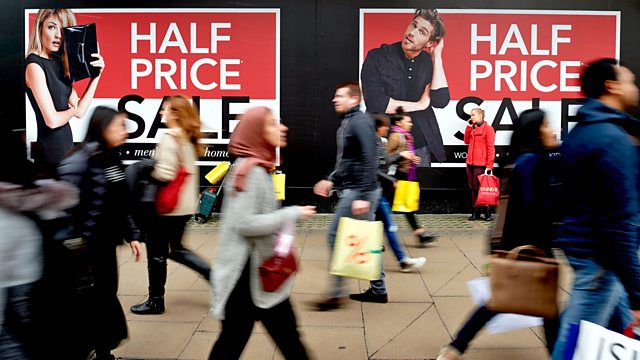 Consumer affairs with Winifred Robinson, including an investigation into the Child Maintenance Service, which has run up arrears of £35 million in just two years.

Marks and Spencer posts results today that will tell us how their shops performed over the festive period. It follows announcements from John Lewis, Next and other big retailers earlier this week. We examine what they're getting right and wrong, and try to build a fictional 'perfect' department store, with all the best bits of the high street in one place.

The Child Maintenance Service, set up in 2012, has now allowed more than 35 million pounds of arrears to accrue. The government said that the CMS would find solutions to the problems experienced by the old Child Support Agency. But one listener says that while CMS staff are friendly, they seem "shackled by their IT system" and are unable to help with his two cases. We ask how well the CMS is performing and compare it with similar systems abroad.

Sales of wearables - things like wristbands and smart watches - are on the up. But other than technology enthusiasts, who is buying them? Lots of smart watches ended up in the November Black Friday sales, suggesting retailers were desperate to get rid of them. Will wearable technology ever achieve the wide popularity that analysts predicted a year ago, or will it only ever appeal to so-called 'early adopters'?