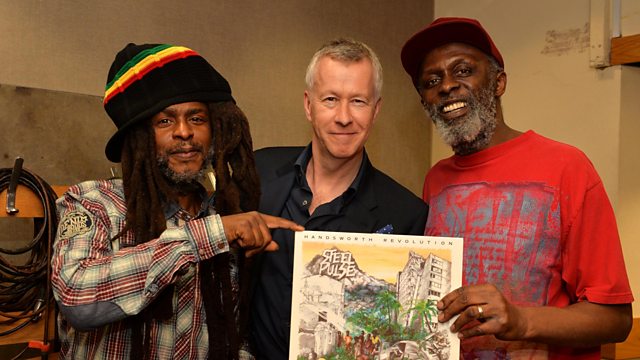 David Hinds and Selwyn Brown talk and play their way back to 1978 and the debut Steel Pulse album, Handsworth Revolution.

John Wilson continues with the fifth series of Mastertapes, the programme in which he talks to leading performers and songwriters about the album that made them or changed them. Recorded in front of a live audience at the BBC's iconic Maida Vale Studios.

Originally formed at Handsworth Wood Boys School in 1975, Steel Pulse were initially refused live dates in Birmingham's Caribbean venues because of their Rastafarian ideals. Instead they aligned themselves With Rock Against Racism and appeared alongside the likes of the Clash, XTC, the Stranglers, Tom Robinson and X-Ray Specs.

It was Burning Spear who brought the group to the attention of Island Records who in February 1978 first released Ku Klux Klan as a single - a full five months before the album itself, which also included Prodigal Son, Prediction and the title track, Handsworth Revolution.

Here David Hinds and Selwyn Brown talk about the album that is widely regarded a milestone in the development of British Reggae, but also perform exclusive acoustic versions of some of the key tracks.

The B-side of the programme, where it's the turn of the audience to ask the questions, can be heard on Tuesday 29th December at 3.30pm.

See all clips from Steel Pulse (the A-Side) (2)