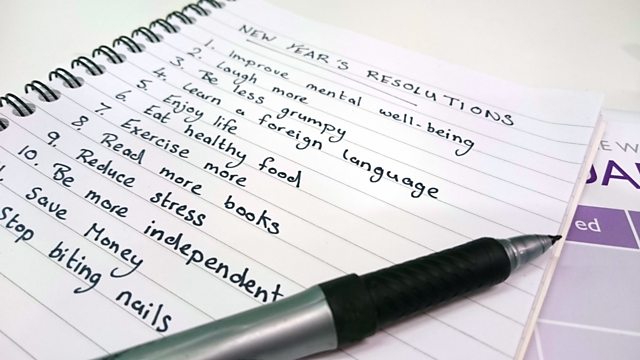 Religious and ethical news. What is the theological meaning behind new year's resolutions, and do they make people happy?

We ask: what is the theological meaning behind New Year resolutions and do they make us Happy? William Crawley is joined by Rosie Harper, vicar of Great Missenden, Rabbi Dovid Lewis and life coach Susanna Halonen to discuss.

Mark Vernon gives an insight into how ancient Greek philosopher's viewed the future as we embark on 2016.

Religious journalist Ruth Gledhill looks ahead to what religious stories will be in the news in 2016.

A vicar in Stoke claims foreign worshippers can "save the Church in England", Bob Walker looks at how and meets migrants and refugees using Anglican Churches as their new place of worship.

The seventh of January marks the first anniversary of the deadly assault on the French satirical magazine Charlie Hebdo. The shooting, was a wake-up call for one young French Muslim, Mohamed Chirani. He's now training to be a prison chaplain. Our reporter John Laurenson went along to meet him.

William talks to Bill Law, a Middle East analyst, about the religious significance of the execution of the prominent Shia cleric Sheikh Nimr al-Nimr. He asks him what will the impact be on Iranian and Saudi relations?