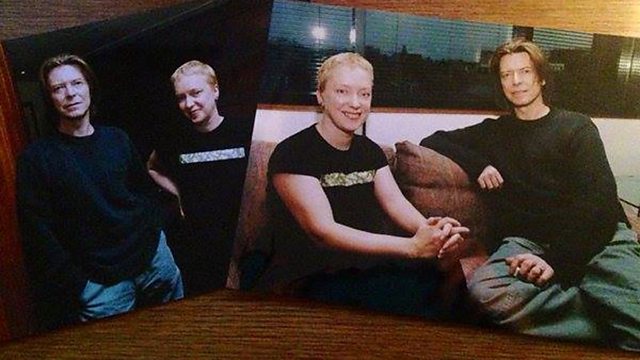 Janice pays tribute to David Bowie with Billy Sloan, Nicola Meighan and Bruce Findlay, including a snippet of her interview with him following the release of his 1999 Hours album.

Janice pays tribute to David Bowie with Billy Sloan, who tells stories of meeting him seven times and being his bouncer, Nicola Meighan, who previewed his Blackstar album with Janice less than one week ago, and record shop owner and Zoom records founder Bruce Findlay.

The tribute includes a snippet of Janice's interview with David Bowie following the release of his 1999 Hours album, in which he talks about his songwriting.

We also hear a snippet of Janice's interview with Eduard Meyer former studio engineer at Hansa Studios, in which he talks about time spent with Bowie and Iggy Pop.

Janice's Single of the Week is Lazarus, from David Bowie's Blackstar album.

Listeners choose their favourite David Bowie vinyl record to be played on the turntable at the end of the show.

Janice plays David Bowie songs and discusses their impact with her guests, including Leo Conde from Glasgow band WHITE, who talks about his introduction to Bowie, and how he changed his life, and what it meant to the band to be signed to Bowie's RCA label.

Channel 4 launches new on demand service Walter Presents, with a wealth of international dramas available to stream. Curator of the service Walter Iuzzolino and critic Paul Whitelaw tell us more.

Our intrepid reporter Bob Dickson meets Selkirk football club's first poet in residence, and explores the poetry to be found in the beautiful game.

Janice explores the issue of art and persecution, ahead of an international reading day in support of Palestinian poet Ashraf Fayadh who has been sentenced to death in Saudi Arabia, with Scottish PEN's Jean Rafferty.