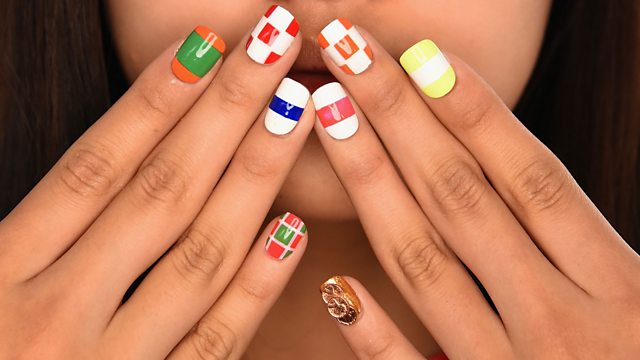 What are the latest trends for this season's nails? Actor Eleanor Bron talks about her new play. Plus how does emotional labour affect our health and well-being?i.

Some people like to decorate their nails with Christmas trees and others prefer a classic block colour, like Santa Claus red. But what looks best? Jenni asks the founder of WAH Nails, Sharmadean Reid, what the latest trends are for this season's nails.

Forget Me Not currently at the Bush Theatre in London examines the consequences of the policy of sending so called 'vulnerable' British children to Australia in the 50's and 60's, many of whom then grew up in appalling conditions. Actor, Eleanor Bron talks about her role in the play alongside Margaret Humphreys, director of the Child Migrant Trust.

As a a High Court judge declares the current law on abortion in Northern Ireland is "incompatible" with human rights law - what's the next step?

Emotional labour is a concept that sociologists introduced as a way of recognising the requirements of a job where an employee might need to display required emotions toward customers or others. Many feminists argue that recognising emotional labour is vital to adequately valuing the caring roles that so many women take on in our society. So do we fully recognise the emotional work we do? Jenni is joined by journalist and writer Madeleine Bunting journalist and Professor Candida Yates, Professor of Culture and Communication at Bournemouth University, to discuss.

And have you ever wondered why so many heroines in novels and film are described as beautiful? Is their appearance making them more worthy of the title of heroine? Writer Claire Harman, author Maggie O'Farrell and film critic Catherine Bray discuss the notion of female characters being defined by how they look.

Listen to Shirley Williams in some previous Woman's Hour content...
In a 2004 interview talking about a lifetime career in politics and academia and why she still believes in the fundamental goodness of the human spirit.
In 2014 on a special programme about friendship.