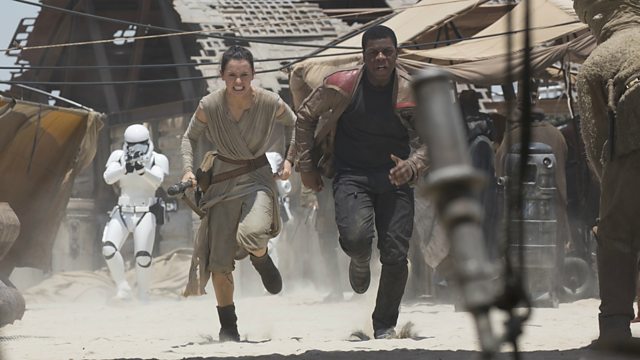 Presented by Samira Ahmed. Featuring a review of Star Wars: The Force Awakens, re-evaluating the poetry of Horace, must-see Christmas TV and the economics of the gallery gift shop.

Star Wars: The Force Awakens reviewed. Thirty years after defeating the Galactic Empire, Han Solo (played by Harrison Ford) and his allies face a new threat in the seventh instalment in the franchise.

For centuries great writers and powerful people have translated the work of the Roman poet Horace. With the publication of a new edition of all his poems - including versions by Elizabeth I, William Gladstone and poets ranging from Sir Philip Sidney to Ezra Pound - Samira talks to the editor, Paul Quarrie, and comedian and classicist Natalie Haynes about the enduring attraction of the old Roman bard.

With a visit to the museum or gallery gift shop increasingly being an integral part of the visitor experience, and one it is often hard to avoid, Elinor Morgan from MIMA in Middlesbrough, Jennifer Harris from The Whitworth in Manchester, and Rosey Blackmore from Tate, discuss the economic importance of the gift shop and how selective galleries need to be in what they choose to stock.

And what to watch this Christmas? Critic Boyd Hilton provides his guide to must-see TV.

Star Wars: The Force Awakens is in cinemas from Thursday 17 December, certificate 12A.