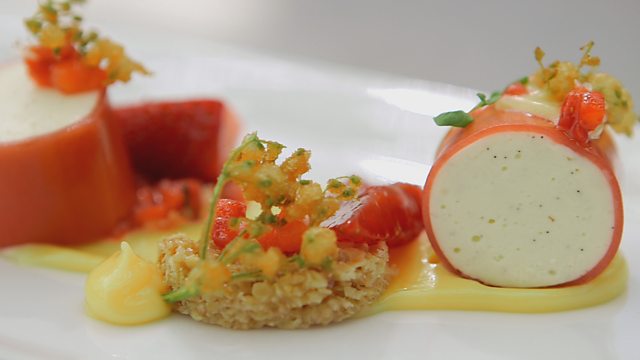 MasterChef: The Professionals Series 8
Episode 14 of 21

Knockout week of the culinary competition. Five chefs must prove they can work as a team when they are asked to create an exceptional dinner at London's distinguished Law Society.

Ten exceptional chefs remain in the competition, and now they have been split into two groups. In this episode, the first group of five are set two daunting challenges by Marcus and Monica. For the first time, the chefs must prove they can work as a team when they are asked to create an exceptional dinner at London's distinguished Law Society, before they return to the MasterChef kitchen to cook off against each other once again. Only the chefs who show the flair, skill and dedication to cut it at the highest culinary level will go through to the semi-finals.

Monica and Marcus take the chefs to the Law Society on Chancery Lane, London, where they have two and half hours to create and cook a three-course fine-dining menu for the president's birthday dinner. Having worked as individuals so far, the chefs must now work as a team to come up with a meal to honour the occasion and meet the expectations of the president and his four guests. From a selection of ingredients including brown crabs, guinea fowl, berries and nuts, the five chefs must work together quickly and cohesively. The pressure is on to serve up a meal to be remembered for the right reasons!

Finally, the chefs return to the MasterChef kitchen where they put their team loyalties behind them and cook as individuals once more. They have 90 minutes to cook one show-stopping dish for Marcus and Monica. It is a tense and thrilling battle and any mistake could cost them their place in the competition. Once they have tasted the five dishes, Monica and Marcus decide which chefs are good enough to become semi-finalists. Only the most talented chefs will continue in the competition and move one step closer to their dream of lifting the Professional MasterChef trophy 2015.