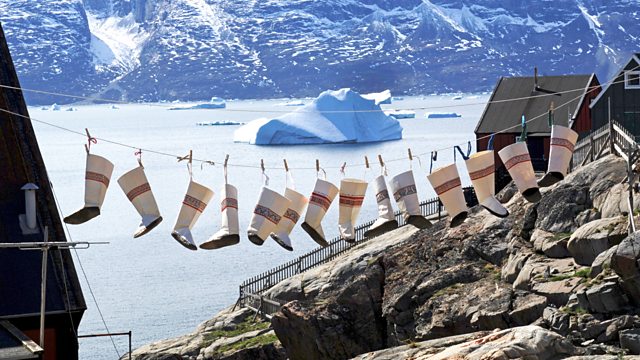 Life in a Cold Climate

Readings by Bill Paterson and Janie Dee from Torkilk Morch, John Haines and Jack London and music by Grieg and Bjorklund reflecting the many facets of living in the frozen north.

Scroll down the webpage for more information about the music used, and the Producer's Notes.

This is a world of extremes.  A place of intense cold where the sea can freeze and both day and night can last for months.  In the northernmost latitudes, life has to fit around the significant challenges presented by the natural world.  This selection aims to give a flavour of what living in these conditions is like.

Torgeir Vassvik is a Norwegian Sami musician and composer who combines the traditional ‘joik’ singing style with drumming, traditional instruments and nature sounds.  His composition ‘The Sea’  serves notice that we are entering a very different world.

In the depths of winter, the idea of weeks of unbroken daylight may seem like a longed for dream, but the Greenlandic poet Torkilk Mørch reminds us, in his poem ‘Light’, that constant sunlight can be as oppressive and disorientating  as unending darkness.  While the Alaskan poet John Haines hints at the strange, dream-like aspects of life in the north in his poem  ‘If The Owl Calls Again’.

The composer John Luther Adams lived in Alaska from 1978 to 2014 and much of his music is inspired by the nature and landscape of the region.  He describes his 1992 work ‘Dream In White On White’ as ‘a response...to the treeless, windswept expanses of western Alaska’.

Netsit was an Inuit poet, living in northern Canada and writing in the early 20th century.  His ‘Dead Man’s Song (Dreamed by one who is alive)’ details many of the key aspects of Inuit life at the time, but also captures the universal frustration of being too preoccupied with mundane anxieties to fully enjoy life before it passes.

Vocal games form an important part of Inuit culture.  Here we have an example of a game called Qattipaartuq, recorded on King William Island in Canada in 1975 and performed by Rose Qiqiak and Kate Kamimalik.  Qattipaartuq is a narrative game which has two characteristics – the refrain is always ‘hapapi, hapapi, ha’ and the voice undergoes a prolonged modulation on one syllable of the refrain.

Alootook Ipellie was an Inuit graphic artist, satirical cartoonist and writer who also lived in northern Canada.  He spent his childhood and early teenage years adjusting with his family to the transition from their traditional, nomadic Inuit way of life, to life in government-sponsored Inuit settlements. This poem ‘ How noisy they seem’ has a strong sense of nostalgia for a lost world.

Sainkho Namtchylak is a Siberian singer with a seven octave range who is noted for her mix of Tuvan throat-singing and avant-garde improvisation.  Although she grew up in Tuva, this song -  ‘Inuit Wedding’ – keeps us firmly in the frozen north.

Aua was an Iglulik Inuit shaman and poet, born in 1870 in Nunavut, northern Canada.  Although the younger Inuit generation are no longer skilled in hunting like their ancestors and are growing more accustomed to the Qallunaat ("white people") food that they receive from the south,  in Aua’s time hunting was a vital part of the Inuit way of life and here is a chest-thumpingly boastful account of a successful, single-handed walrus hunt.

Staying in Canada, we travel a bit further south for Howard Cable’s ‘The Banks of Newfoundland’ performed by the Toronto-based Hannaford Street Silver Band.  In 1979, Cable adapted his ’Newfoundland Rhapsody’ – originally written for a wind ensemble -  for brass band, adding three movements to the folk tunes he had already collected in Newfoundland in 1947.

Hunting could, and in some regions of the north still does, mean the difference between life and death.  In Greenlandic poet Gerda Hvisterdahl’s ‘Where’, the bemused hunter trudges across the white wilderness, searching vainly for his prey.  Torkilk Mørch’s ‘Greenland Sharks’ alludes to a harsh and marginal existence where risking death is better than going hungry.

Sarek National Park is a mountainous area in the north of Sweden.  Sven Hørnell’s photographs of the dramatic landscape – displayed in his studio close to the mountains - inspired the Norwegian jazz pianist and composer Terje Bjørklund to write ‘Sarek’.  The piece is performed by The Trondheim Soloists, for whom it was composed.Peter Høeg is a Danish writer, but the protagonist of his 1992 novel ‘Miss Smilla’s Feeling for Snow’ is the daughter of an Inuit mother and Danish father and spends her childhood in Greenland before moving to Denmark.  As a child, she develops an almost intuitive understanding of all types of snow and their characteristics and here she describes how she first discovered this gift. Wimme Saari is one of the best known Sami joikers from Finland.  He combines traditional Sami singing with his own improvisations, usually to a techno-ambient accompaniment by members of Finnish electronic group RinneRadio.  ‘Oainnáhus’ tells of a journey from Wimme’s home mountain up to the frosty sky and the Northern Lights, and then beyond to the ‘real’ world beyond the stars.

‘A Finn’ is the best known poem by the Finnish writer Jorma Etto and is a bracingly self-deprecating dissection of the Finnish character.

One of the most famous Finns is surely Jean Sibelius.  If you listen to all the coverage celebrating the 150th anniversary of his birth, you should be able to decide whether or not he matches up to  Jorma Etto’s description.   Here is ‘Song in the Forest’, one of five ‘Esquisses’ from 1929 – the last pieces Sibelius composed for solo piano.  It’s played by Joseph Tong.

There is no shortage of myths and fairy tales associated with the far north and you can find out more about them elsewhere in the Northern Lights season.  Although ‘The Lapland Woman and the Finland Woman’ by Judith Taylor takes Andersen’s ‘The Snow Queen’ as its starting point, it zooms in on two minor characters who exemplify the qualities of resilience and hospitality which make life in such an uncompromising part of the world possible.

One of the ways in which people throughout the northern latitudes deal with the inescapable cold and darkness of winter is by drinking.  The Danish tenor Lauritz Melchior sings the traditional Swedish drinking song ‘Helan Går’with appropriate gusto.  Then Siberian poet Sergey Samoylenko anatomises the downside of riding out the winter this way in ‘Last year I lived at the bottom of a bottle’.

‘Seven Days of Falling’ sounds like a typical week in the life of Samoylenko’s neighbour, but it’s a composition from 2003 by Swedish jazz pianist Esbjörn Svensson.  Svensson’s untimely death five years later brought an abrupt end to what promised to be a long and distinguished career.

The cold north of Siberia has become the unwelcome home for many exiles over the years.  In the 20th century, the notorious GULAG system saw millions of individuals in the USSR sent to live in forced labour camps.  The conditions in these camps were described in detail by Alexander Solzhenitsyn  in  ‘The Gulag Archipelago’ , published in 1973. This extract is from his earlier, fictional work  ‘One Day in the Life of Ivan Denisovich’.

The composer Alexander Mosolov was another artist who fell foul of the Soviet authorities.  He was arrested in 1937 and sentenced to eight years hard labour.  Fortunately a petition led to his sentence being reduced in 1938 to a five year ban on entering Moscow, Leningrad or Kiev.  This is from his Cello Concerto which he wrote in 1946, performed by Sergei Sudzilovsky with the Russian Cinematographic Symphony Orchestra.

Over a century earlier, in 1825, a group of young Russian officers took part in the Decembrist uprising in St Petersburg.  Five of the ring-leaders were hanged and the others were exiled to Siberia for life.  Several of them were friends of Alexander Pushkin and in 1827 he sent  them this poetic message of hope – ‘In far Siberia’s deepest soil’.

‘Tundra’ by the Danish composer Poul Ruders was commissioned by the Helsinki Philharmonic Orchestra in 1990 to celebrate the 125th anniversary of Sibelius’s birth.  Ruders has said that the title is ‘a word which represents the quintessence of the far North’.  The piece is performed here by the Odense Symphony Orchestra, conducted by Scott Yoo.

Even when they are not sent there as a punishment, those who travel to the extreme north for work can find themselves trapped in a harsh and forbidding world.  When the writer Joanna Kavenna visited Greenland,  she found the remains of remote, deserted mining camp which hinted at the hardships that had been endured there.

The Norwegian composer Jon Øivind Ness explains the title of his 2011 piece ‘Bogey Thresher’ thus: ‘A Bogey Thresher is a threshing machine for ghosts, a machine designed to harvest spectres’.  Who knows what it might have found at that eerie mining camp?  It’s performed by Øystein Baadsvik with the Arctic Philharmonic Orchestra.  The Klondike gold rush in the late 19th century saw thousands of prospectors travelling to Alaska, hoping it strike it rich.  As Jack London put it ‘When the world rang with the tale of Arctic gold...the lure of the North gripped the heartstrings of men’.  In his short story ‘In A Far Country’,  two men – Weatherbee and Cuthfert – join the stampede, but find themselves wholly unprepared for the rigours of the North and, overwhelmed, their expedition unravels.

As we leave Cuthfert standing desolate in the dark,cold solitude of an Alaskan winter, Edvard Grieg provides us with a more consoling vision of a Northern landscape on which to end.  ‘Evening in the mountains’ is one of the composer’s Lyric Pieces and draws on his walks in the spectacular scenery of the Jotunheimen mountains in western Norway.