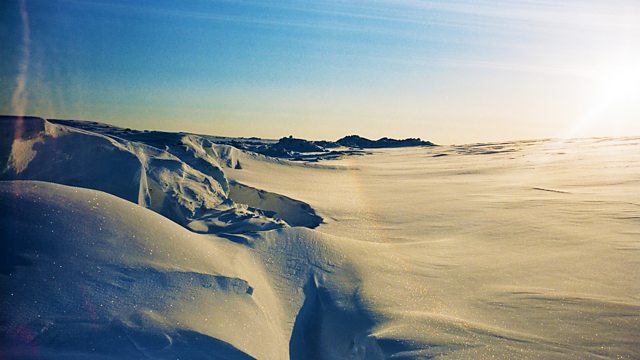 Olivia Williams and Charles Edwards go on a literary journey to the North Pole through texts by A A Milne, Jules Verne and Pindar, and including music by Rautavaara, Nystroem and Tanya Tagaq.

Life in a Cold Climate

As part of Northern Lights on Radio 3, this edition of Words and Music looks at the most northerly point of our planet: the North Pole, in both its geographical and magnetic sense.  It’s a place that has captured the imagination of explorers from Robert Peary, the American citizen who became the first man to ‘claim the Arctic gold’, to Ranulph Fiennes and the Norwegian Salomon August Andrée, who ambitiously set out from Spitsbergen to reach the North Pole by hot air balloon with tragic consequences.  All these explorers play a part in this programme, together with Frankenstein travelling north of St Petersburg to icy climes and Winnie the Pooh on his ‘expotition’ to the North Pole.

The North Pole is located on an ice sheet afloat the Arctic Ocean, but no longer seems as unobtainable in our globalized world.  It is now possible to engage in Arctic tourism and the North Pole has even hosted an international golf tournament.  Jules Verne foreshadows man’s desire to own a piece of the North Pole in his fictional auction of the ‘land’.

Whilst the reality of the North Pole is one the most inhospitable places on Earth, with its harsh climate and utterly barren landscape of ice, the idea of travelling as far north as possible has lent itself to a romantic vision since the 1st century AD.  The early histories of Herodotus, Hesiod, Homer, and Pliny the Elder claimed that the Hyperboreans were a joyful people who lived beyond the North Wind.  Pindar too wrote about the fabulous gatherings of the Hyperboreans and their carefree lives filled with wonderful frolics and bounteous feasts.

A spiritual romanticism about the Northern Lights also characterizes the far North in Sufi mysticism.  The dawning of light in the cosmic North, and of the Midnight Sun in particular, represents the impartial but brilliant light of Truth.  Berber mythology also depicts the North Pole as the perilous gleaming mountain, al-Jabal al-Lamma, which looms on the furthest point of the earth, lying in a mist-shrouded land of ice and circled by flocks of white birds.

There is neither a distinct music culture in the North Pole nor much music specifically about it.  This edition of Words and Music does, however, use music entirely from the Northern Lights countries, and particularly music that captures the frozen landscape, the misty halo of freezing air that hovers above the ice on the wide almost-circular horizons, the biting winds and the frenzied arctic seascapes.  Above all, it sounds cold!

The musicians closest to the North Pole are Inuit and the programme begins with the Canadian Inuk singer, Tanya Tagaq, singing her hauntingly beautiful and chilly-sounding song, Howl.  The Kronos Quartet also plays a wild Inuit Throat Song to accompany the mythical Hyperboreans dancing and reveling beyond the North Wind.  Another musical tradition from the far north comes from Norwegian Yoiking and the programme ends with Nils-Aslak Valkeapaa performing a traditional yoik, Kemi lea Kemi.

Much of the classical music, from Lars-Erik Larsson to Sorensen, and Tveitt to Rautavaara, uses wind music – particularly for flute or recorder – that captures the sense of the howling arctic wind.  At the centre of the programme, Nystroem’s Ishavet refers directly to the ferocious Arctic Ocean.

I have also used music made from recordings of landscapes beyond the Arctic Circle.  Terje Isungset makes music out of his own ice percussion and has recorded in igloos in the far north of Sweden and Norway.  Two of his compositions take part in this programme: Ice Talks and Ice Memories.  John Luther Adams is also preoccupied with the arctic landscapes of the far northern part of Canada, and his piece, Where the Waves Splash, Hitting Again and Again, follows Frankinstein in his journey northwards.  Chris Watson’s Weather Report is made from recordings at Vatnajökull, the Vatna Glacier of Iceland, which depicts the 10.000 year climatic journey of ice formed deep within this Icelandic glacier and its lingering flow into the Norwegian Sea.