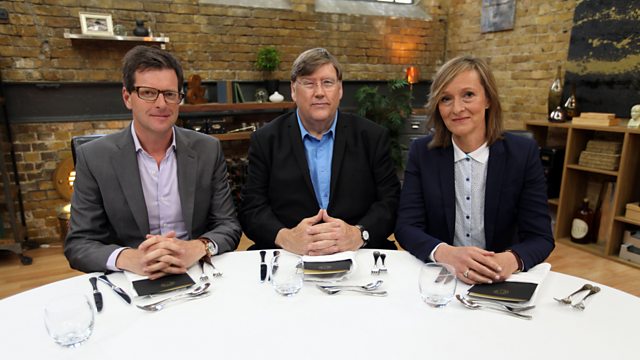 MasterChef: The Professionals Series 8
Episode 6 of 21

Marcus Wareing and Monica Galetti preside in the quarter-final. The chefs cook for some of the UK's most discerning restaurant critics. Only the top three chefs will go through.

It is the quarter-final and the six best chefs from the week's heats return to the MasterChef kitchen to continue in the pursuit of the winner's crown. They must prove themselves to Marcus and Monica in two challenges set to test even the most experienced chefs. Only the three most talented will make it through to Knockout Week.

The chefs begin with an invention test set by Monica and Marcus. They are given an hour and thirty minutes to make a dessert from a selection of ten ingredients including whole almonds, apples, strawberries and mascarpone cheese. To impress, the chefs need to dig deep into their repertoire and show that they have the all-round knowledge the judges are looking for in a champion. Any weakness will cost them, as after this round two more chefs' dreams will end when they are sent home.

Next, the remaining four chefs cook for some of the country's most discerning restaurant critics. With a two-course menu of their own design, this is their chance to catch the eye of three people whose word can make or break careers. However, with only one hour and fifteen minutes to turn out four portions of their main and four of their dessert, the chefs need to show a keen sense of control, timing and attention to detail if they are to turn out plates of food special enough to get them noticed and to convince Monica and Marcus that they have the talent to stick around in the competition. Only the three most talented chefs will make it through to Knockout Week.