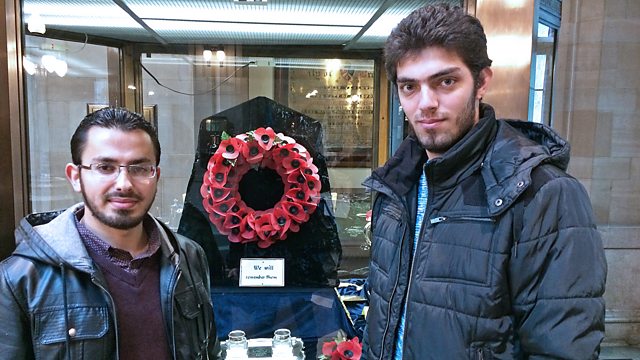 From Syria to Yorkshire

Owen Bennett-Jones travels to Bradford to meet some of the first Syrian refugees brought to Britain under the Vulnerable Persons Relocation Scheme.

Under the UK government's Vulnerable Persons Relocation Scheme over 200 Syrians - all judged to be particularly at risk - were taken from refugee camps in the Middle East and re-housed in Britain, many of them in Bradford. This summer, as the migration crisis became ever-more acute, the government agreed to help many more Syrians. Owen Bennett-Jones travels to Bradford to meet some of those who were first brought to Britain under the scheme. Their remarkable stories paint a vivid picture of war-torn Syria - and tell us a great deal about the UK too.

Image: Syrian refugees settling in Yorkshire, Ayham and Mohammed attend an archetypically British event – Remembrance Sunday in Bradford. They didn’t know about it beforehand but when it was explained that this was a service to remember those killed in war, they wanted to come and felt the relevance to their own lives. But did the other people attending want them there?