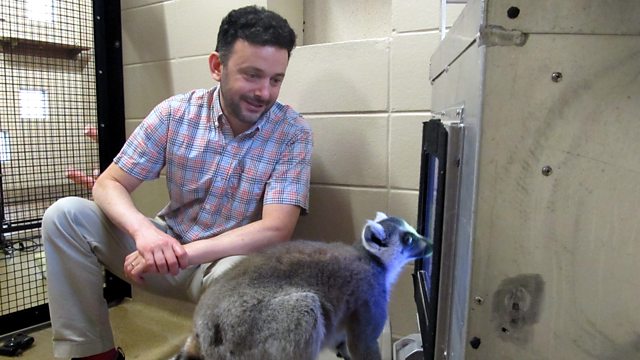 Documentary. Counting parrots, lemurs on computers and tribes without numbers. Alex Bellos seeks clues to how our species evolved and acquired its mathematical abilities.

Lemurs and parrots accompany maths writer Alex Bellos as he explores the foundations of our ability to understand numbers. What are the fundamental numerical skills which we share with other animals? What accounts for our species' unique abilities to do complex calculations that others cannot?

Alex seeks answers from psychologists and cognitive scientists who are studying the number senses of creatures as diverse as tropical fish, lemurs, monkeys and birds.

Among others, he visits Professor Elisabeth Brannon at Duke University in North Carolina. At the Duke Lemur Center, she introduces him to Teres, a ring-tailed lemur. Teres sits at a computer screen and solves the number tests presented to him with his brain and his nose. Professor Brannon's work with lemurs, monkeys and humans shows that they all share one brain system which gives them a well-tuned sense of number - be they objects, symbols or sounds. The animals have an abstract concept of number, although it is a fuzzy and approximate one.

Alex also visits the parrot lab of Professor Irene Pepperberg at Harvard University. As well as meeting and hearing from her latest parrot subjects, he talks to her about another Alex - her former star subject. This Alex was an African grey parrot who died prematurely in 2007, aged 30.

Alex was also an acronym for Avian Learning Experiment. He learned the words and their meaning for dozens of objects, colours and materials as well as concepts such as bigger and smaller, and same and different. Irene also taught him to speak and count the numbers from one to six exactly, and recognise the Arabic symbols for those numbers.

According to Irene Pepperberg and Harvard colleague Susan Carey, towards the end of his life, Alex was able to do something with his apparent understanding of numbers which no other non-human animal had ever done before. They say he made the same numerical mental leap which human children make at around the age of 4 or 5. This leap allows us to understand any number of any size exactly.