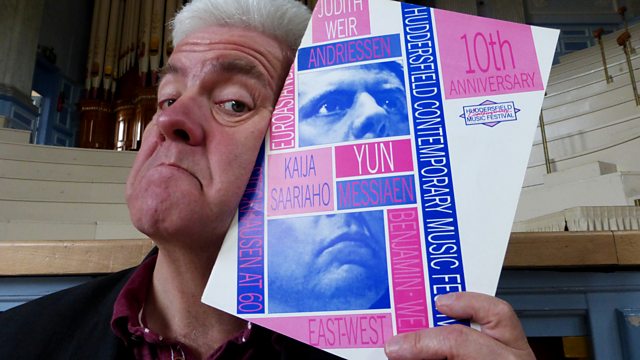 When Stockhausen Came to Huddersfield

Ian McMillan finds out what happened when the controversial German composer Karlheinz Stockhausen's visit to the 1988 Huddersfield Contemporary Music Festival nearly ended in disaster. This super star of the Avant Garde, who featured on the front cover of the Beatles Sergeant Pepper album, had been shocking audiences since the 1950's with his dazzling compositions. He was lured to the quiet West Riding mill town for its 10th anniversary festival, because the South Bank in London couldn't provide the rehearsal time and a suitable venue for his composition, Sternklang or 'Star Sound'. The Festival Director Richard Steinitz had promised him the cavernous council owned sports hall for the performance, which was turned into an indoor park for the occasion, complete with Christmas trees and artificial turf. While setting up for a concert in Huddersfield Town Hall part of the ceiling fell onto Stockhausen's mixing desk and narrowly missed injuring the great man himself. During his visit Stockhausen developed a taste for the local curry house, bought ear plugs to get to sleep in the railway hotel and invited local people to get ready for 'visitors from outer-space'. His reputation had gone before him, and he didn't disappoint those who were lucky enough to be there. The visit put the festival on the map, and has become part of local folklore. Ian is joined by the writer and broadcaster Robert Worby, the then Festival Director Richard Steinitz, Technical Manager Steve Taylor, musician Peter Britton who trained the student performers, and Jim Pywell who was a music student at the Polytechnic at the time.