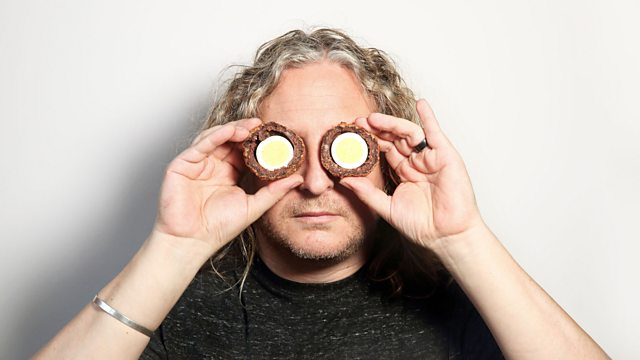 If everyone has had a bad scotch egg does that make the good ones even better? Joe Warwick celebrates its rise from simple snack to the culinary creative's new palette.

Scotch eggs may conjure memories of Summer picnics, school dinners or even Alan Partridge but the humble bar snack has been elevated to a culinary canvas on which chefs can make their own mark and feature on the menus of some of the UK's top restaurants. Food writer Joe Warwick invites you to the madness and mayhem of the Scotch Egg Challenge at which chefs and retailers compete with traditional and unconventional recipes for the glory of the title of winner. But with Thai, Peruvian and vegetarian versions on offer how far can you go before it's no longer a scotch egg? What are the key essentials and when have you gone too far?

Joe digs into the history of this bundle of glory, hears from chefs as they prepare for the big night and finds out why a pub can get packed to the rafters by people clamouring to try a piece of scotch egg heaven.

Presented by Joe Warwick
Produced in Bristol by Anne-Marie Bullock