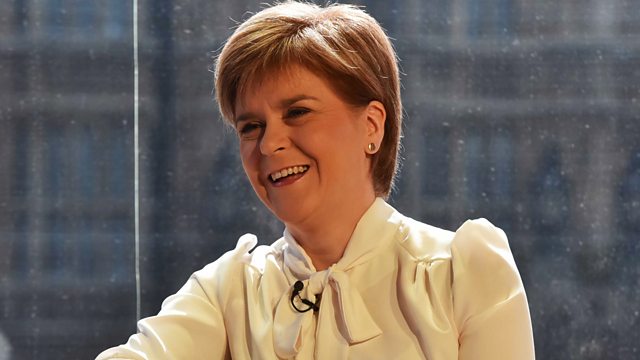 Leader of the Scottish National Party (SNP) and the fifth First Minister of Scotland in the devolved era, she is the first woman to hold either post. The eldest of two daughters, she was brought up in Irvine and attended the local Dreghorn Primary School. A studious child, she was encouraged in her interest in current affairs by a teacher and joined the SNP aged 16. At 21, she was the youngest candidate in the 1992 General Election, contesting the safe Labour seat of Glasgow Shettleston.

She learned a lot about electoral defeat in those first years, but after several unsuccessful attempts, she was elected to the Scottish Parliament as a list MSP for Glasgow in 1999. She served as the party's shadow minister for education, and later for health and for justice and was elected deputy leader of her party in 2004, standing on a joint ticket with Alex Salmond. When the SNP won the highest number of seats in the 2007 election, she was appointed deputy First Minister. She also took on responsibility for the SNP's independence referendum campaign.

In November 2014, following the No vote in the Scottish independence referendum and the subsequent resignation of Alex Salmond, Sturgeon was elected leader of the SNP and became First Minister of Scotland. She's been awarded the Scottish Politician of the Year award three times and in 2015 was judged to be the Most Influential Woman in the UK by BBC Radio 4's Woman's Hour.

She is married to Peter Murrell, Chief Executive of the SNP.