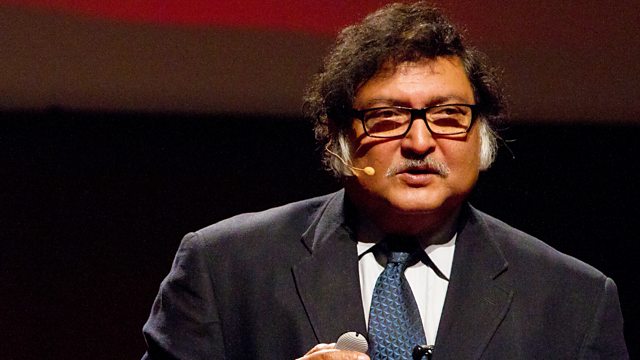 As part of Radio 3's Free Thinking weekend, Michael Berkeley talks to Sugata Mitra, who has started a revolution in education. He believes schools as we know them are obsolete; that exams shut down the brain; that children learn best when left alone, with computers, and that the best teachers are not education professionals, but grannies, who simply say 'Wow! That's amazing! How did you do that?'
Sugata Mitra is the Professor of Educational Technology at Newcastle University. In 2013 he was awarded the million dollar TED Prize to help build a School in the Cloud, a creative online space where children from all over the world can gather to answer 'big questions'. Though Sugata Mitra now lives in Gateshead, he was brought up in Delhi, and his work with children in the slums there was the inspiration for the Oscar-winning film Slumdog Millionaire.
In Private Passions, he tells Michael Berkeley about the ground-breaking experiment in Delhi which has become famous as the 'hole in the wall' - he fixed a computer into the wall of a slum, and watched what happened. Within months, children who had never seen a computer before were browsing, painting, and downloading electronic keyboards and drums to make music. Teachers, he discovered, were obsolete. This was a particular personal challenge, as he was a teacher himself at the time!
Tearing up the rule book, Professor Mitra developed a radical new model of how to teach children, using computers. He talks in Private Passions about how to release children's creativity - but also how to safeguard them from the darker side of the internet. His music choices fuse East and West, with collaborations between Yehudi Menuhin and Ravi Shankar; the love poetry of Tagore; Rimsky-Korsakov's Scheherazade; and a canon by Bach which can be played forwards and backwards.