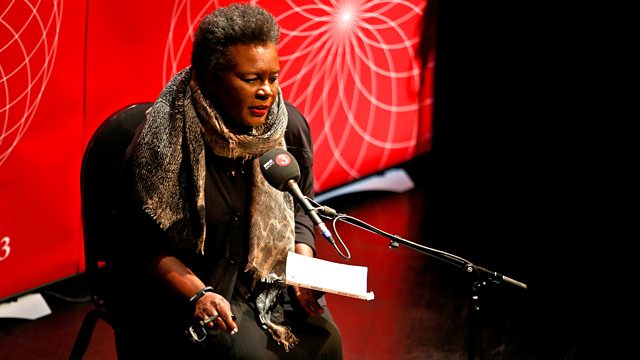 Anne McElvoy presents a special edition of Start the Week at the Free Thinking Festival at Sage, Gateshead, exploring injustice, myth and the role of the poet 'to name the unnameable, to point at frauds, to take sides'. The American poet Claudia Rankine exposes the ever-present racial tensions in contemporary society, while the Syrian poet Amir Darwish, having arrived in the UK hanging underneath a lorry on a cross-channel ferry, writes of love, loss, exile and demonisation. The historian Catherine Fletcher looks at the stories told about Alessandro de'Medici, the 16th century duke of Florence who was believed to be mixed-race, and what those stories tell us about attitudes to race, while the philosopher Jules Holroyd tackles the thorny issue of implicit and unconscious bias.
Producer: Katy Hickman.

Claudia Rankine is a poet.

Citizen: An American Lyric is published by Penguin.

Catherine Fletcher is Associate Professor in History and Classics at Swansea University.

The Moor of Florence: A Medici Mystery will be published in April 2016.  Catherine’s essay on the subject will be broadcast on Monday 9 November at 10.45pm on Radio 3.

Amir Darwish is a poet.

Don’t Forget the Couscous is published by Smokestack Books.

Jules Holroyd is a lecturer in philosophy at the University of Nottingham.

Jules is currently working on a project entitled ‘Bias and Blame: Do Moral Interactions Modulate the Expression of Implicit Bias?’