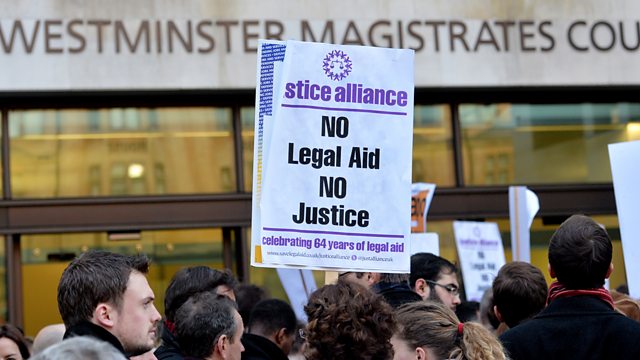 Solicitors affected by cuts in criminal legal aid give their verdicts on how the changes will affect them, and Joshua Rozenberg interviews Supreme Court judge Lord Carnwath.

Solicitors are in uproar over government changes to the criminal legal aid system. The budget has been slashed by 17.5 per cent and the number of firms eligible to provide duty solicitors to represent clients at police stations has been reduced from 1600 to just over 500.

Firms which lost out are bitterly disappointed and there are fears that successful firms will be over-stretched, lowering the standard of service for clients.

In the week the new contracts are due to be signed, Joshua Rozenberg goes to Nottingham to meet two solicitors - one whose bid for three new contracts was successful, the other who got nothing.

Also in this week's programme:

Supreme Court judge Lord Carnwath on whether the courts should have a role in the climate change debate.

A magistrates court on the Isle of Wight recently dismissed a case against a father who refused to pay a fixed penalty notice for taking his daughter on holiday during term time. What might their ruling mean for other parents?

And on the 50th anniversary of the abolition of the death penalty Joshua speaks to Julian Knowles QC, author of a history of capital punishment.

A Threat to Justice?