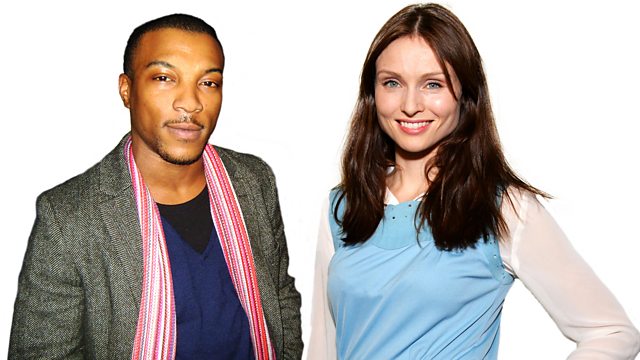 Sophie Ellis-Bextor first topped the charts with Groovejet (If This Ain't Love) and successes continued with hits including Murder On The Dancefloor and Take Me Home. Sophie joins Aasmah and Richard to talk about her career, taxidermy and reaching the final on Strictly Come Dancing.

Ashley Walters found fame as rapper Asher D in So Solid Crew. He's subsequently carved out a successful acting career, including an award winning performance in the film Bullet Boy, and starring roles in Top Boy and Inside Men. Ashley discusses his career, playing PC Ryan Draper in BBC drama Cuffs, and dealing with his phobia of birds.

We visit listener Jo Rhodes's Community Soup project in Settle, in North Yorkshire. In exchange for £4, hungry punters receive a bowl of soup, entitling them to vote on one of 4 pitches. Once all pitches are heard, votes are cast the winner takes all- to kick-start their project.

Mark Mason talks about travelling Britain collecting facts and trivia from every one of its 124 postcode areas.

Cricket Umpire Dickie Bird shares his Inheritance Tracks: Nat King Cole When I Fall in Love and Barbra Streisand The Way We Were.

Donal Skehan is a self-taught cook who has been in a Boyband, had a failed bid to represent Ireland in the Eurovision song contest and has been a presenter on Junior MasterChef. He reflects on his varied career and the art of presenting food.

Sophie Ellis-Bextor's latest album Wanderlust is out now.
Cuffs starring Ashley Walters starts on Wednesday 28th October at 8pm on BBC 1.
Mark Mason's Mail Obsession: A Journey Round Britain by Postcode is out now.
Dickie Bird - 80 Not Out, written with Keith Lodge, is out now.
Donal Skehan's latest book 'Fresh' is out now.