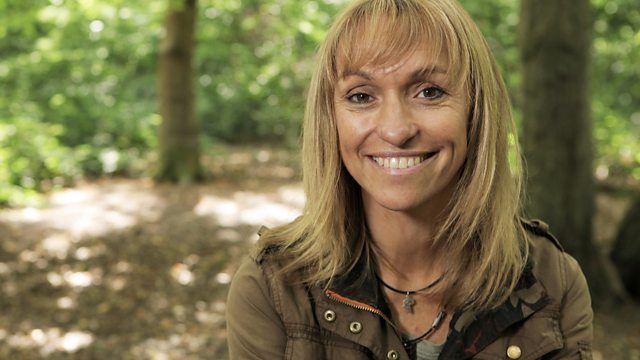 Springwatch presenter Michaela Strachan makes an appeal on behalf of Breast Cancer Now, the UK's largest breast cancer research charity. Last year, Michaela was diagnosed with breast cancer, so she knows only too well what it's like to live with this disease which will affect one in eight women in the UK in their lifetime.

The film features Connie, who was diagnosed with breast cancer aged 23. Following a mastectomy, Connie found that the cancer had spread to her liver. We also meet Jim, who lost his wife Moira to secondary breast cancer.

Donate to this month's Appeal

To find out more about Breast Cancer Now please go to: http://breastcancernow.org

I thought I was brave taking part in the celebrity diving show Splash!, facing my fear of heights, achieving an inward pike (a fancy backward dive) off the 7.5m board. I had pushed myself to the limit. My body and mind were exhausted. But I was proud of what I’d achieved. Little did I know that two weeks later I’d be faced with another challenge, a huge, unexpected curve ball that would test my strength and courage in a very different way.

Before I was diagnosed in 2014, I knew very little about breast cancer. The diagnosis came completely out of the blue. The tears started to roll as my doctor tried to tell me what would happen next, but I only took in every fifth word or so. The one word that registered was ‘cancer’. How had this happened? I don’t have it in the family, I live a fit and healthy life. I couldn’t get my head around that on Monday morning I’d been apparently healthy, by Tuesday I had breast cancer, and by Wednesday we were talking about a double mastectomy.

I hope that by sharing my story for this Lifeline Appeal I can be of some help to other women who find themselves at the start of this frightening journey. I hope I can remind them about the importance of having regular mammograms. If I’d put mine off, my story could have been a very different one. As it is, I had a tough year and an emotional journey after my diagnosis. But when I heard that my breast cancer hadn't spread, I felt such relief. I know I’m one of the lucky ones – I’m not fighting for my life.

Sadly though, around 1,000 women in the UK die from breast cancer every month. That’s one woman every 45 minutes whose life is cut short by the disease. That’s why I support Breast Cancer Now, the largest breast cancer charity in the UK. They are dedicated to funding world class breast cancer research, to stop women dying of breast cancer. They believe that if we all act now, by 2050, everyone who develops breast cancer will live.

We are Breast Cancer Now, the UK’s largest breast cancer research charity, created by the merger of Breast Cancer Campaign and Breakthrough Breast Cancer. We’re dedicated to funding research into this devastating disease.

Breast Cancer Now’s cutting edge research is focussed entirely on breast cancer. Right now, we’re funding around £23 million worth of ground-breaking research projects, supporting nearly 450 of the world’s brightest researchers at more than 30 institutions across the UK and Ireland. Together they’re working to discover how to prevent breast cancer, how to detect it earlier and how to treat it effectively at every stage so we can stop the disease taking lives.

We believe that if we all act now, by 2050, no one will die from breast cancer. But we’ll only reach that point by working in a new, collaborative way. We’re bringing together all those affected by the disease to improve the way we prevent, detect, treat and stop the disease. So we can move from a time when people fear breast cancer to a generation where everybody lives.

Jim met his wife Moira at the tender age of 18, first day, first night at university. The couple married when they were 24, and before long became parents to three young children.

He said, ‘It’s like a charmed life and you think, what can go wrong? It was a sunny day, sat in the garden, and Moira just said, “I think I’ve got a lump”. When Deborah started to feel the effects of kidney disease, she started to explore her options to improve her quality of life.’

Moira went for tests, and the result was conclusive. It was breast cancer. Deborah’s husband volunteered to be tested as a living donor but he had high blood pressure issues and couldn’t proceed. Deborah’s only option was to start dialysis.

He said, ‘You just get that icy cold feeling. Fear in the pit of your stomach.’

In 1995, Moira had the lump removed and for a time there was no sign of the disease. But then the cancer returned, and this time it spread to her bones and lungs, and then her brain.

Jim said, ‘I can remember her saying on one of these holiday trips across to France, she’d watched me with the three kids around me and she said, you know, the hardest thing for her to realise was that’s what the future was going to be. She wasn’t in that picture.’

After four years of medical treatment, Moira was discharged from hospital for the final time, to be at home with Jim and their three children.

He said, ‘The kids had gone to bed and I was just sitting on the bed next to Moira with my arm round her and round about midnight she just very peacefully stopped breathing. She just died.

Time’s a great healer but here we are 16 years on and sitting talking about Moira and the tears start flowing, it’s in you, its deep in you, it doesn’t go away, it never goes away.’

When Connie Johncock left school, she was full of ideas about her future.

Connie said, ‘It was get my degree, get a job, see the world and then settle down, get a house and anything that life threw at me I thought I could handle. I thought I was made of iron.’

Connie was aware of Breast Cancer, as there was a history of the disease in her family.

She said, ‘My nana and my aunt caught it in their 30s. So now and then I would just give myself a check and then one day during the Christmas I felt something that wasn’t quite right.’

Tests confirmed that like her nan and her aunt before her, Connie now had breast cancer.

Connie said, ‘I felt like I’d walked right into a massive brick wall. I can’t quite remember how the rest of it went, it was a blur.’

Connie had a mastectomy and chemotherapy, but within weeks her doctor confirmed that the cancer had spread to her liver.

She said, ‘I just remember asking him, you know, can I have a transplant, what can you do? And he said there’s nothing we can do. Hearing those words is quite tough.

Breast Cancer Now fund around 450 scientists throughout the UK and Ireland. One of those scientists is Dr Paul Shore of The University of Manchester. His research is revealing the complex ways that breast cancer cells behave.

Paul said, ‘Most people might think that the primary breast cancer was the cause of the loss of life but in most cases it’s because the breast cancers spread to other organs in the body.’

He said, ‘When the cell becomes cancerous it becomes very mobile, it will move out of the breast in to the blood stream. When we remove this gene that we’ve discovered, what we saw was these cells are no longer able to move. For us it was very exciting discovery that could well be a way to prevent breast cancers from spreading.’

And for Paul there’s also a personal motivation for his research. His wife was diagnosed with breast cancer in 2008.

He said, ‘The funding that we get from Breast Cancer Now is absolutely essential to enable us to ultimately develop drugs to cure breast cancer.’

Nearly a thousand women lose their life to breast cancer every month in the UK. Research offers desperately needed hope for the future.