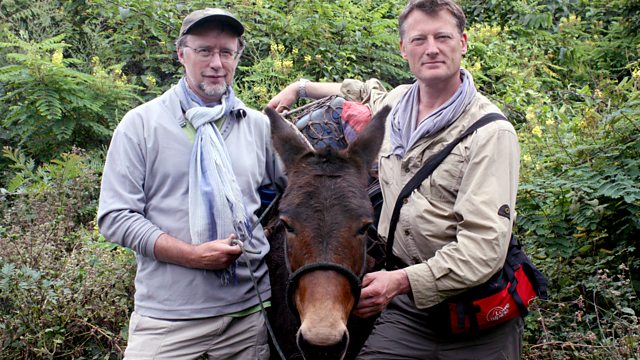 The Festival of the Snows

Explorers Hugh Thomson and Benedict Allen make the arduous journey to Qoyllurit'i, the so-called 'festival of the snows', held high up in the glaciers of Peru.

The Andes have become a symbol of a lost world of Inca wisdom and cities in the clouds, of the Celestine Prophecy and Indiana Jones. It needs two men (and their mule) to cut their way through the mystique with some machetes and wit.

For the third and final programme of the series, explorers Hugh Thomson and Benedict Allen - along with their trusty mule Washington - make the arduous journey to Qoyllurit'i, the so-called 'festival of the snows' held high up in the glaciers of Peru, where 30,000 people gather for what is very much a Glastonbury of the Andes.

This is one of the very last places where the rituals and beliefs of ancient Peru still intersect with the present in an extraordinary mix of pre-Colombian and Christian ritual - festival goers walk to the high glacier with crosses, which take on the spirit of the glacier and are then carried down the mountain to local chapels, from where the spirit of the glacier can watch over the community.

The festival is policed by bear-men who whip the participants if they do not follow the elaborate set of rituals prescribed for the festival from the beginnings of Andean culture.

To the Last City of the Incas

See all episodes from Two Men and a Mule