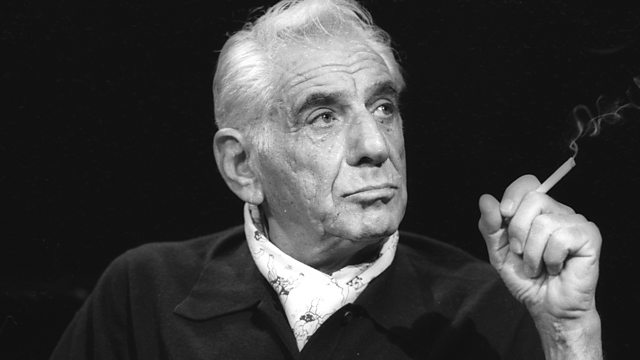 Conductor Marin Alsop remembers the life of her mentor, Leonard Bernstein - his rise to fame, his contribution to classical music and his impact on her life and work.

No other conductor has made such an impact on Marin Alsop as Leonard Bernstein. He taught her at several points along her path to becoming a professional conductor and imparted his humanistic perspective on life and his love of sharing great music with others. He instilled in her his beliefs, his values, his dedication to education, as well as his understanding of conducting. Her sense of gratitude to Bernstein is part of the subject of this programme.

We hear Marin talk very personally about her memories of working with the maestro at the famous Tanglewood music center in Massachusetts and watching him conduct concerts in New York.

We also hear the reflections of Leonard's daughter, Jamie Bernstein, who remembers - as a child - watching the Young People's Concerts that Bernstein presented to vast televisions audiences across America while director of the New York Philharmonic.

John Mauceri and Matthew Barley who, like Marin, benefitted from Bernstein's teaching and mentoring offer their perspectives on his huge capacities as a teacher, conductor and composer.

The programme considers the music Bernstein himself composed, in particular West Side Story, Kaddish and Mass. Marin discusses what makes Bernstein's music so rewarding and complex, so innovative, experimental and widely appreciated. She admires his commitment to harmony, to tonal music - the place where he felt music communicated most deeply to people.