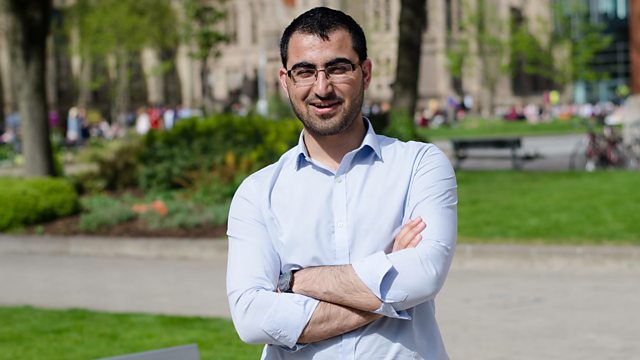 Dawn Rose started out as a session drummer with bands including 90s group Right Said Fred before becoming a psychologist and music therapist. She is performing in The Happiness Project at the Roundhouse which was devised by a company of young artists, scientists and academics to explore our understanding of happiness and well-being. Dawn will perform a drum duet with one of the teenagers during the performance. The Happiness Project is at the Roundhouse, London.

At 12 Gulwali Passarlay was sent away from Afghanistan by his mother to escape the conflict that claimed his father's life. After a harrowing journey across eight countries he arrived in the UK a year later. Now 21, he is in his third year studying politics at the University of Manchester and works with aid organisations and youth groups. His ambition is to return to Afghanistan and become its president in 2035. The Lightless Sky - An Afghan Refugee Boy's Journey is published by Atlantic Books.

Sir Dermot Turing is the nephew of the mathematician and codebreaker Alan Turing. The author of a new biography of his uncle, Dermot brings his personal insights, drawn from family sources and Alan's own notebook and diaries. The book explores the impact of Alan's codebreaking work at Bletchley Park and the tragedy of his early death in the wake of his conviction for gross indecency in 1952. Along the way Dermot presents a portrait of Alan the man - his friendships, his loyalty and his extraordinary achievements. Prof - Alan Turing Uncoded by Dermot Turing is published by the History Press.

Rhiannon Adam is a photographer and the winner of the Royal Geographical Society's Journey of a Lifetime contest. The contest, established in association with BBC Radio 4, offers individuals the chance to make an exciting and imaginative journey and present it in a radio documentary. Rhiannon, who grew up on a sailing boat in the Atlantic reading romantic stories about The Mutiny on the Bounty, chose to explore the romance and reality of Pitcairn Island. Journey of a Lifetime is broadcast on BBC Radio 4.