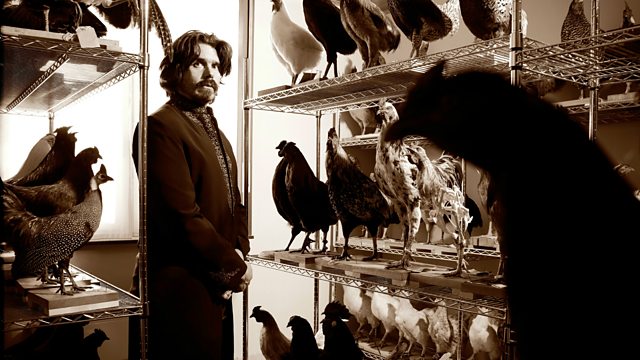 How Did the Chicken Cross the World?

As a race, we humans owe a fair amount to the chicken. Throughout time it has been a religious deity, a medicine source as well as being a food. It's travelled the world alongside explorers, inspired scientific revelations and of course been the nub of the world's most famous joke.

Today, chicken is the second biggest supply of meat protein in the world, and it's on the rise. More than four times as much chicken is now consumed in the USA than in the 1950s, and as new markets emerge in the Middle East and Asia, our hunger for chicken is only set to grow. To meet demand, the bird has become a valuable commodity, farmed and processed in a factory setting.

In this programme Dan Saladino tracks the chicken from its roots in the Asian jungle, to its place on our dinner plates today with help from Andrew Lawler, author of 'Why Did The Chicken Cross The World'. He discovers how a competition in the 1950s had a radical impact on the type of chicken we eat and hears how genetics, cooking and art might have a role to play in preserving some almost forgotten breeds and tastes.

Dan asks geneticist Professor Bill Muir where will we take the chicken next?

NB. Correction. The Buckeye chicken was developed in the 1890s, not the 1820s as stated in the programme.

Visit the Rare Breeds Survival Trust  to find chicken breeders and producers in the UK.

You can find plenty of seasonal chicken recipes on the BBC Food website.