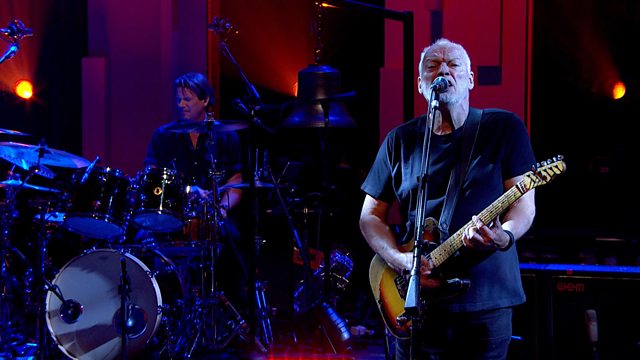 Toronto's the Weeknd made their British TV debut on the last Later to be filmed at TV Centre - now they are back with a breakout hit Can't Feel My Face and a new album Beauty Behind the Madness, in which Abel Tesfaye takes his bruised R&B out of the underground and into the mainstream. Former Pink Floyd guitarist and songwriter David Gilmour returns to premier material from his fourth and typically epic solo album Rattle that Lock, while just across the studio, London ragamuffins and summer festival headliners the Libertines heal their wounds and regroup for more ragged rock 'n' roll from their third album Anthems for Doomed Youth. A few years back, Denver's Nathaniel Rateliff appeared on Later as a solo singer-songwriter, now he's back with an uproarious take on old-school soul powered by band the Night Sweats on their self-titled debut album. Finally, Ukraine's magnificent and totally barking quartet DakhaBrakha, whose name derives from the Ukrainian for give and take, with a blend of folk melodies, accordion, cello and harmonies that has been memorably described as ethno-chaos.